This 13-Year-Old Who Dreams Of Becoming An IAS Officer Is Now Bedridden With Bone Cancer | Milaap
loans added to your basket
Total : 0
Pay Now

DJ
You are sending a message to
DEEPAK JUSTIN
Go back

"There was a time when my son used to talk about providing us with a good and comfortable life. He always dreamt to become an IAS officer. He is a hard worker and always focused on his studies and nothing else. Now he’s unable to even sit and walk because of the swelling in his legs and he’s completely bedridden. He doesn't know that he has cancer. Tears gush out of eyes every time I see him crying in pain." - Chandrasekhar, Navadeep’s father.

Navadeep always wanted to provide his parents all the comforts in the world, while father Chandrasekhar made every effort to provide his sons the best of everything. Navadeep was all happy and excited when he was promoted to 8th grade and wanted to make the most of the last days of the summer vacations he had.


Navadeep before he was diagnosed with cancer

“One day he came home limping, he told that he fell down while he was playing with his friends, when asked about it. I gave him ointment and he used to apply it whenever he gets pain in his legs. He would just lie in the bed feeling uneasy whenever he gets pain in his legs. I couldn't see him going through such pain and so took him to the hospital. An X-Ray was taken and it was then he got diagnosed with a tumor in his leg.”

Navadeep was under medication for 15 days, when he got diagnosed with a tumor in his bone. Despite the treatment he was unable to walk and he got swelling on his legs every now and then. He even stopped going to school as the pain in his legs didn’t allow him to sit or walk. Chandrasekhar took him to the hospital again and after a series of tests he was diagnosed with bone cancer and 5 centimeters of his bone had already turned black. Navadeep is suffering from osteosarcoma, a type of cancer that starts in bones and spreads into other body parts slowly. He needs urgent chemotherapy and a surgery to recover from this fatal disease.

“I’m still unable to recover from the shock when I was told about the deadly disease that has taken over my son’s life. I didn’t have the courage to tell my son that he’s at death’s door. Every time he asks me why they’re giving him injections, I would just say it’s for curing the pain in his legs. He has always been nice to everyone and I feel blessed to have a son like him. He never talked ill of anyone, how could such an ill-fate fall upon him?”

As a farmer, earning good income has been a difficult thing for Chandrasekhar. He could hardly earn Rs 30000 per year. Despite such a crisis, he worked hard to provide his sons with better education. After knowing that his elder son is diagnosed with cancer, he took a loan of 4 lakh which is to be paid with high interest. With that loan, he could pay for 3 chemo sessions and Navadeep needs 2 more chemo sessions and a surgery. But Chandrasekhar is left with no money to continue the procedure.

“I never thought such a dreadful thing would happen to my son. My wife is now looking after the crops and doing my work and taking care of my younger son so that I can take care of Navadeep. I didn’t even tell her that Navadeep is fighting with such a deadly disease. There’s no one to help me to save my son from this deadly disease and now I feel helpless as I’m left with no money for my son’s treatment.”

Navadeep is suffering from bone cancer that can easily spread into other body parts. With a loan of high interest, Chandrasekhar could only pay for 3 chemo sessions and now he’s running low on funds. Navadeep needs to undergo 2 more chemo sessions and a surgery to fight cancer. As a farmer earning very low income, Chandrasekhar cannot afford the treatment and he needs your help to save his son from such a life-threatening disease.

Your support can help this poor farmer save his son 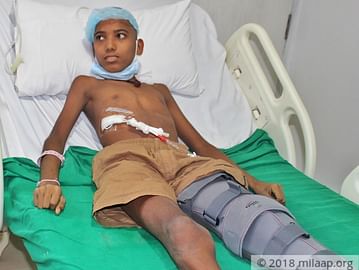 UPI: givetochandrasekharred@yesbankltd (Copy to clipboard)
Or
Click here to read the instructions before you make a bank transfer.