Even after a damaged intestine this 21 Year old is not giving up on his hope to join the Indian Army | Milaap
loans added to your basket
Total : 0
Pay Now

You are sending a message to
Mohit toppo
Go back

Shares
Shares
Share on whatsapp
Life of 21-year-old Nishant Nandan has taken an unfortunate turn. In the last 3 months this young engineering student in his final year of college, from preparing for army entrance exam has now become completely bedridden, fighting for his life every day. Most of the doctors he met declared him "An extremely critical case with a minimum chance of survival" however the boy doesn't want to give up and has been constantly battling the illness and hopes to recover soon so that he can complete his studies and sit for the army exam (CDS) next year.
Nishant is suffering from an extremely fatal condition which has caused the development of gangrene in his small intestine and has created a more than 1.6 liters of poisonous liquid in the intestine. The only cure for him to undergo "small bowel transplant" so that get's another chance to fulfill his dreams.

Nishant's treatment will cost more than 30 lakhs rupees your support can only help this young boy save his life.

"Every one thought that it was just another gastric problem"

The doctor in his hometown initially thought it was a case to bad stomach due to prolonged eating out of Nishant in college and started treating him with medicines of gastric problem and stomach upset.

Nishant did get cured from the initial treatment however his stomach used to frequently go bad. On 22nd April Nishant's condition suddenly deteriorated, from complaining about stomach ache, Nishant started constantly vomiting and his urine mostly contained blood.

During the ultrasound it was found that his small intestines was entangled and had developed a gangrene, Nishant required an Immediate procedure to be performed.

Since this was an extremely critical case the doctors took the parents consent and had to remove 25 cms of intestine from both sides, the intestine was also covered with a poisonous fluid which was hampering it's proper functioning, in order to ensure the intestine properly functions, the intestine had to be taken out of the stomach is now sits outside the stomach with a bandage.

The doctors suggested it would be extremely difficult for Nishant to survive, however after four days, when he came to senses he was happy and willing to fight for his life.

"I am dissapointed that I cannot sit for CDS exam this year, however I will surely gear up with my preparations next year" Said Nishant after he came to senses from the surgery recalls he brother in law - Neeraj

The doctors then referred him to a hospital in Delhi, since the transplant in Patna was not possible however the private hospital quoted an estimate of 80 lakh rupees for the transplant

Since Nishant's family is from a farming background arranging such amount of money was impossible for them.

The family then tried to contact other famous hospitals in Delhi, however, all the hospitals refused to undergo the transplant and suggested them that Nishant may not live and the transplant can't guarantee a success.

Nishant's brother in law, after doing some research came to know about a successful case in Apollo hospitals, Bangalore.He contacted the hospital and got more than a positive response, the doctors were convinced that Nishant can be saved and he might recover from the illness.

However, an esitimate of Rs 30 lakhs has been given for his treatment.

Currently, Nishant is shifted in HDU unit of Apollo hospitals and requires your support to save his life.

Nishant's condition is so bad that whatever he eats gets ejected by the intestine as it is. Also, Nishant's father is a farmer who barely makes 4-5 k per month from farming. He still wants to sell off his land and save his child. The family will be able to arrange 8- 10 lakhs for his treatment however they would still require 20 lakhs to ensure Nishant is saved.

Your contribution will save a young life who wants to serve the country and is fighting hard to stay alive. 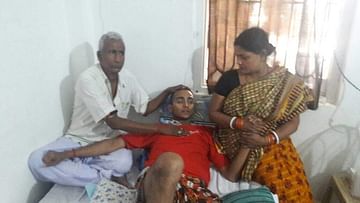 Help us raise funds for 21 Nishant Nandan who is suffering intestine malfunction and save his life.