NP
You are sending a message to
Nawaz Pasha
Go back

Shares
Shares
Share on whatsapp
In our busy lives where our abilities are taken for granted, we forget that living along with us are challenged people who have special needs. Who could better understand the needs of the visually challenged than someone who has suffered it himself? Nawaz Pasha, a visually challenged man in his mid-40s, hails from a poor family. Pasha has come a long way after losing his sight at the age of ten. He had defied all logic when it comes to success. He is determined to make the lives of people like him comfortable.
Pasha with the residents of the hostel

He Runs a Hostel for the Visually Impaired Girls

Pasha worked for a school run by Bethany Congregation for 10 years providing community-based rehabilitation to disabled people and minority communities. There he felt the urging need to provide a safe place for girls who are visually challenged. One reason being it was always women who were like a pillar to the school he worked for. He found that it was effortless for them to help others and they were exceptionally hard working. But on the other hand, he also observed that women had a lot of restrictions and every step is a hurdle for them. A lot of women were stopped from coming out of their house owing to safety.
It was then Pasha decided that they should be provided with a safe place and be motivated to pursue their dreams. He was keen to provide support and strength to visually impaired girls by all means. He decided to tread on a path that even a normal sighted people would give a second thought.

Pasha started Adarsh CDS Trust to focus on the empowerment of the visually impaired through a multi-pronged approach at the youth level, across rural and urban areas. Besides running a hostel for the visually impaired girls he provided education and personality development course to them. He left no stone unturned in raising funds to pay the rent and provide basic needs for them. Though it looked beyond his limits he never gave it up.

An unfortunate incident has shattered all his hard work and dreams in a blink of an eye. A leakage in the gas had led to a fire accident in the hostel. Two of the residents of the hostel who were visually impaired and the cook got severe burns. They were rushed to hospital with great difficulty. The worst was yet to come, the two girls who were taking treatment in Victoria hospital, Bangalore passed away.
Pasha's distress and pain are beyond words. He fell down and his leg is fractured. Doctors have advised him to take rest for two months. This is not just the materialistic loss and damage of the hostel, it is the hope and dreams of Pasha and those girls staying in the hostel. They are emotionally exhausted and now battling the most difficult phase of their life.
Your Funds can Help them find a New Place to Stay
Although this incident has left a deep scar on him he refuses to brood over the incident. He gathered all his strength and now focusing to provide treatment to the burn victims and finding a place to relocate.
However, this is not possible without the support of funds from people who wish to support his cause. Pasha needs funds to relocate the hostel. It is not just for a better place but for better peace of mind as well. Girls who are staying in the hostel are now struggling to cope with the trauma. Owner of the hostel has already asked them to find another place.

The condition is such that providing treatment to the burn victims has become very difficult, paying a huge sum as advance to a new place and to cover up other loss is beyond their means.Now Pasha and the visually impaired girls have only one option- to rely on the generosity of well-wishers and strangers.
Click here to know more about the campaign
Donate 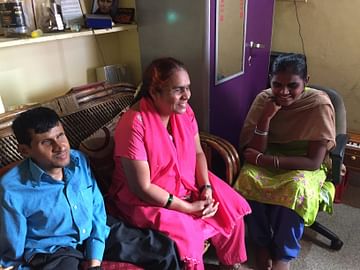 Hostel caught fire and they need funds for burn victims and to relocate.