Mother Struggles To Afford Surgery For Her 4-Year-Old Who Has A Growing Tumor In His Chest | Milaap
loans added to your basket
Total : 0
Pay Now

K
You are sending a message to
Koushalya
Go back

“I have always taught my kids not to lie, however, I’m lying to my 4-year-old son  everyday. I am telling him we would go home soon and that nothing is wrong with him. I don't have the heart to tell him that he has cancer and he needs to stay in hospital till he is cured," – Shalini, mother

Stefon hates the smell in the hospital. He hates being tied to a bed - but most of all, he hates the regular injections and the strong medicines. He cries to be taken home where he can play with his younger brother.  Shalini, his mother, is having a tough time consoling him that they would go home soon once he has recovered.


“Stefon is God’s gift to our family. He is the first grand-child and hence a much-pampered kid. It is hard to believe that one’s life is at stake at such a young age of 4. My sister and brother-in-law are going through a very tough phase. I try to help as much as possible by taking turns with Shalini  to look after Stefon. She needs to be around her younger son too.” – Kaushalya, Shalini's sister.

Stefon, a very active and naughty kid, fell ill a few months back. He was admitted to the hospital with fever and a swelling in his chest. On diagnosis, it was found that Stefan has Ewing’s Sarcoma, a rare kind of bone cancer.

Stefon has a cancerous tumor in his ribs and needs to undergo chemotherapy and radiotherapy followed by surgery.

“Stefon is losing his hair rapidly and his nails have turned black. He complains of throat soreness and a severe pain in his abdomen. Sometimes, when there is blood in his urine, he gets very scared and starts crying. As a mother, I’m unable to look at all of this happening to my son.  He was a happy and carefree kid until just a few days back.” – Shalini.

Stefon’s father, Suresh, is a carpenter who earns around 200 Rupees a day. He is unable to even be around his son during the treatment as he is the sole breadwinner of the family. He is wokring overtime in order to earn some extra money. Yet, he is not financially capable to support his son’s treatment cost that is estimated to be 7 lakhs. They need the money for the treatment, you're their only hope now.

Suresh and Shalini are in dire need of your contribution to save their beloved son. 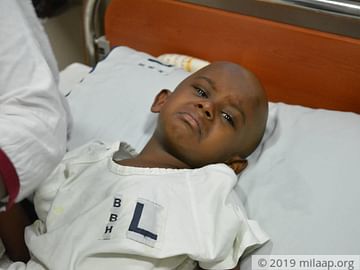 Stefon Wants To Go Back Home To His Brother, But He Needs Treatment

These parents are struggling to save their son from cancer, you can help

UPI: rzpy.givetomlpna000000348@hdfcbank (Copy to clipboard)
Or
Click here to read the instructions before you make a bank transfer.