This 3-year-old Has A Rare Genetic Disease And She Needs An Urgent Liver Transplant To Stay Alive | Milaap
loans added to your basket
Total : 0
Pay Now

“Rithu loves idlis. She is a foodie baby. Most parents struggle with children who are fussy eaters. My child is a blessing, and she ended up with a disorder that affects her liver. She needs to be on a diet at 3 years of age! What’s worse, my son has it too!”

At 3, Rithu is a mischievous little girl. She loves playing with her brother, Akhilesh, and at the same time, fighting with him over the silliest of things. While the two fill the house with their laughs and screams all day long, they also share the same genetic disease. Rithu was the first to be diagnosed. Her body cannot break down food for energy, and as a result, she is suffering from liver failure.

She ate but she never put on weight

Akhila and Sudheer had their first child in 2014, a year into their marriage. Rithu was the picture of health, until her stomach began to swell. She was around 18 months old when Akhila realized that her baby was not putting on weight but had an abnormally large belly.

“We took her to the local hospital. The doctor said it was a liver issue and referred us to Rainbow in Hyderabad. After a lot of tests and liver biopsy, we discovered that she had trouble breaking down glycogen. She needed to be on a strict diet. The doctor said, as long as she did not have milk or ice cream, she would be fine.”

We did everything we could but still, she ended up with liver failure

Unfortunately, even after following the diet, Rithu’s condition did not improve. She was not growing fast enough, and though the bloating reduced, they discovered that her liver was damaged beyond repair.

“When we returned to the hospital for a followup, we took our younger child, Akhilesh with us. It was horrifying to hear that Rithu needs a liver transplant to survive. It shook us, even more, when Akhilesh was tested and diagnosed with the same disorder. Both need liver transplants. Without it, we will lose our children.”

Sudheer is the sole breadwinner for the family. He works as a business correspondent for Rs. 10,000/month. He takes care of all finances for the house and Akhila manages the rest. With the crisis, the family is now in turmoil as they hardly have enough to support one surgery. Now, they are struggling to source as much as they can to save both children.

“Rithu loves going to school. She studies so well and is very social. She keeps looking at her biopsy scar and says she had a surgery. Whenever we go back to the hospital, she asks whether it is for another surgery. She is in so much pain, yet she cooperates. She loves to eat, but we must restrict. It hurts us to see our little girl suffer when she should be pampered. Her grandmother is taking care of both Rithu and Akhilesh now when we are off trying to source funds.”

Although friends are trying to support the family with Rs. 1000 and Rs. 2000 donation, they are still far from their goal. Rithu needs Rs. 16 lakhs for her surgery and she can survive with your support.
Contribute now and help this baby girl beat a disease that has been haunting her since birth.

The specifics of this case have been verified by the medical team at the concerned hospital. For any clarification on the treatment or associated costs, contact the campaign organizer or the medical team.
Click here to contribute to Rithu or for more details on this campaign.
Donate 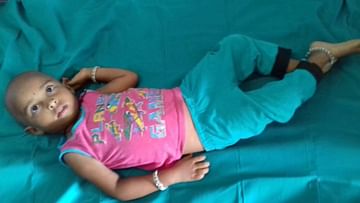 Rithu was diagnosed with a severe hereditary liver disease and urgently needs to undergo a liver...

UPI: givetogoudfunds@yesbankltd (Copy to clipboard)
Or
Click here to read the instructions before you make a bank transfer.