He’s The Only Child In India With This Deadly Disease, His Father Has Just 7 Days To Save Him | Milaap
loans added to your basket
Total : 0
Pay Now

You are sending a message to
Vinayak Deokar
Go back

He’s The Only Child In India With This Deadly Disease, His Father Has Just 7 Days To Save Him

Shares
Shares
Share on whatsapp
Aarav is only 4, but his life is nothing short of extraordinary. He isn’t like other children his age. In fact, Aarav isn’t like any other child in India. He’s the only child in the country to suffer from a rare and dangerous disease that has made his immune system so weak that he’s had diarrhoea for the past 14 months.

“They told us he’s the 7th child in the world to get this disease. It’s reduced him to just bones. He’s only 7 kgs now…look at him, you can count his ribs, his spine. He’s so weak that he has to be carried everywhere, he can’t eat anything he likes. This is not the kind of life he deserves to live. He’s disappearing in front of our eyes.” – Sandeep, father

No medicines can cure of Aarav of immune deficiency disease due to caspase-8 mutation. It’s unheard of in India, and it was many hospitals later that Aarav’s parents found out about this disease. He needs a bone marrow transplant in the next 7 days. Else, Sandeep and Arthi will lose their son.

How can I tell you that he was a happy child when this is the only life he has known?

Aarav has always been a sickly child. What hurts Sandeep the most is that his son was born with the disease, it’s genetic. But for 4 long years, no one could tell him what was making his son so sick.

“I’ve carried his frail body from one hospital to another, with no answers. It was finally in Mumbai that his condition was diagnosed a few weeks ago. Now there’s no other way but for him to get the bone marrow transplant. Nothing else will work. He hasn’t ever gone to school, hasn’t ever played…this can’t be the end..”

Ask Sandeep how Aarav was before this disease, and he has nothing to say – his only child has always been in pain. Whether it was a fever, cold, cough or even a small infection. He has been in and out of the hospital and now, isn’t even scared of the doctors anymore. He just cries out in pain.

The next 7 days will decide Aarav's fate

As hard as it has been for little Aarav, it has been as difficult for Sandeep and Arthi to watch him go through this. Sometimes, helplessly. It has also been difficult for them to afford his tests and hospitalizations. They have spent over 7 lakhs so far – loans, friends and family. The past three months have been the worst, though.

“This is the sickest he’s ever been. I haven’t gone to work in 3 months. I used to work at a construction site. I earned Rs. 7,000 per month. It was never enough to take care of my Aarav…how can I leave him now? There so much running around to do at the hospital.”

Aarav needs the bone marrow transplant in the next 7 days. The earlier, the better. But his parents are so helpless and live in fear of losing him every day. Your support will finally give Aarav a pain-free life. He deserves to know health and happiness.

The specifics of this case have been verified by the medical team at the concerned hospital. For any clarification on the treatment or associated costs, contact the campaign organizer or the medical team.
Click here to save Aarav
Donate 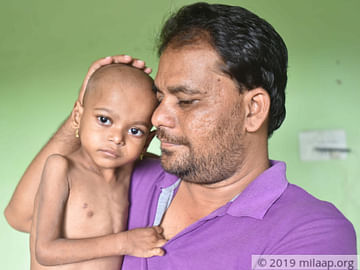 The Next 7 Days Will Decide Aarav's Fate

He needs a bone marrow transplant in the next 7 days. Else, his parents will lose him forever.

UPI: rzpy.givetomlpna000000381@hdfcbank (Copy to clipboard)
Or
Click here to read the instructions before you make a bank transfer.