With help from Milaap’s lenders, cooking is no more a risky affair for Manju Bar | Milaap

With help from Milaap’s lenders, cooking is no more a risky affair for Manju Bar

As I walked through the narrow passage leading to Manju Barik’s house, I was greeted by their pet: a parrot; yes, it talks! As I settled down to converse with Manju, the parrot started to say, “Utho,” which means “Get up” in Hindi. It says that word in morning to wake up people. Soon Manju joined me after finishing her daily prayer. She is yet to prepare lunch for her family, but she says she’ll do so once I leave since it takes only about an hour. Thanks to the new low-smoke cook-stove, she even prepares dinner and breakfast within 1 hour and 30 minutes respectively. Her husband raises a paddy crop on the small plot of land they own and earns about Rs.35,000 every year by selling some of the produce. Her old cook-stove consumed about 6-8 sticks of firewood every day, while the new low-smoke cook-stove needs only 2. That saving of Rs.300 to Rs.400 through reduced fuel consumption is a lot for her family.

The smoke released by her old cook-stove would spread throughout her congested house and make life difficult for all the family members living in the house. The new cook-stove hardly emits any smoke and she doesn’t have to blow air using a pipe to keep the fire active, unlike earlier. More than the reduced time, cost savings and clean air provided by the new cook stove, what makes the new stove a favorable one is the safety it offers. A couple of years back, Manju’s sari caught fire while cooking food using the makeshift cook-stove. Fortunately, she escaped with minor burns. The fire in the new cook-stove being restricted to the cook-stove very well, there are no such safety concerns. The new cook-stove not only made cooking an effortless task but also a safer one. 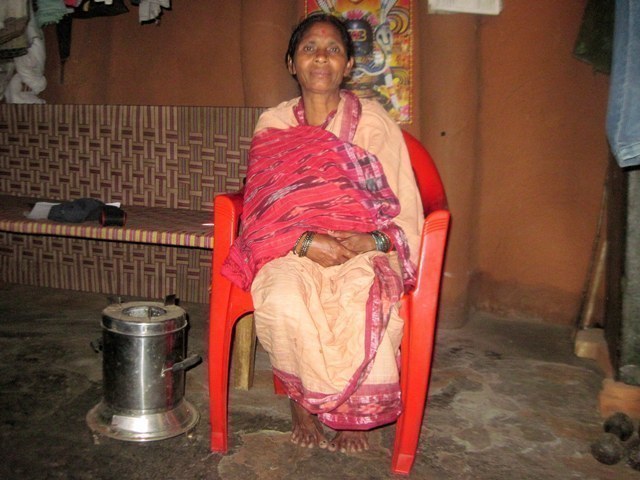 Manju Barik with her low-smoke cook-stove