The blazing sun was manifesting its power in full swing. As the sun climbed towards its zenith, that Monday had turned into a scorching day. I was in Chandkheda, accompanied by one of the unit staff members from Prayas. It is a district in the northwest of the metropolitan city of Ahmedabad in Gujarat. I was here to check on the progress of Kailash Mahila Mandal, a group led by Manjulaben, after they had borrowed an enterprise loan from Milaap’s community of lenders.

Manjulaben, a 46-year-old amiable woman warmly welcomed us into her quaint little house. There was another delightful little fellow who welcomed us with his adorable smile: Jaydeep, the 6-month-old grandson of Manjulaben. She dotes on her grandson. A couple of months back, Manjulaben had taken a loan from Milaap in order to expand her embroidery business. She decorates various fabrics such as bedsheets, pillow covers, and wall hangings using needle and thread. She has been into this business for the past 3 years. And simultaneously, she has also been working as a housemaid for 5 years.

Life has been onerous for Manjulaben. I was inspired by her tale of hardships. She made sure to provide all her three children with at least a secondary education by working as a daily wage laborer. Her husband was unemployed for 20 years, and he recently started working as a security guard. Now, both her sons are into the scrap business, and her daughter is happily married. She wants a lot more for her grandson.

This was Manjulaben’s second loan cycle; the purpose for both the times being buying stock for embroidery business. But this time, the loan was utilized by her in order to clear a previous debt. Upon being asked further about it she said that the loan was used to pay the debt created by her son’s marriage. But she emphasized that she never wants to stop working and that was obvious from the way she had been working all her life.

“I undoubtedly am going to work because there are household expenses that need to be met and then there is Jaydeep’s education too that needs to be taken care of,” she said with conviction.

She no more runs the embroidery business and she stated the reason for it was its declining demand. But, she wants a loan in order to start a provisional store so as to supplement to the family’s income. I am hopeful that this time the loan will be used for the intended purpose. 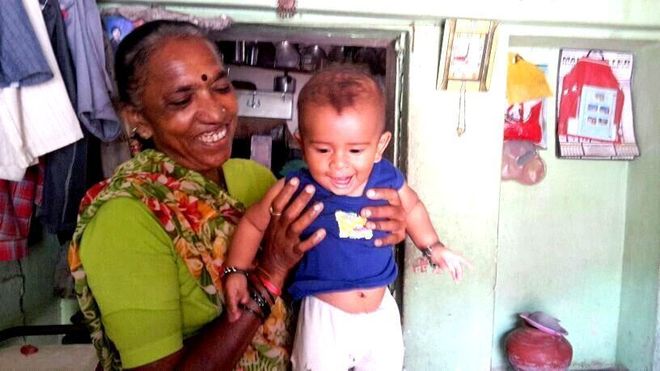 Manjulaben with her grandson Jaydeep