The many way Afroja uses her solar lantern | Milaap

The many way Afroja uses her solar lantern

Shares
Shares
Share on whatsapp
Of the the six branches of DCBS, a small MFI that operates out of a town called Dakshin Barasat in West Bengal, their branch at Jeevan Mandal Hat is the oldest and contains the most members. The members of DCBS's branch in J.M. Hat are all women who participate in some sort of enterprise that helps provide for their families, and they have organized themselves into self-help groups that support one another. Today, I was able to meet with one such group of women called "Tithi". This is one of the larger self-help groups in DCBS, due to the demand in enterprise and energy loans in the area.

The women that comprise the group "Tithi" are all involved in different businesses. The women who attended the meeting went one by one explaining what type of business they are involved in. Although the majority of them work with clothing, there was a whole range of other enterprises, from window grill production to fruit businesses to a store that sells pots and pans.  Most of these women had been associated with DCBS for years and were receiving financial support for their businesses.

The purpose of today's visit was to pitch a newer model of solar lanterns.  The SunKing Pro+ is the newest product available to the members of DCBS. This new model contains an input to charge one's phone and the new solar panel can store up to 4 more hours of energy. The light is also much brighter and focused. I asked some of the ladies in the how they felt about the solar lamps.

Most of the women had nothing but great things to say about the lights they already had purchased with their solar loans from Milaap. The consensus was that many had initially bought one lantern for a particular purpose, but they realized after using the lantern that it could be utilized for many other day-to-day activities. Group leader Afroja explained, "First, I got a lantern so my children could study at night. But then, I realized that the lantern was a great alternative to candles and normal tube-lights. I now use the light to cook in the morning, and when I have to leave my house at night I use it as a flashlight." Overall, I was very pleased with the interest these women had in utilizing solar energy to substitute their day-to-day electricity uses. It gave me hope that soon solar energy would play a larger part in their energy needs. 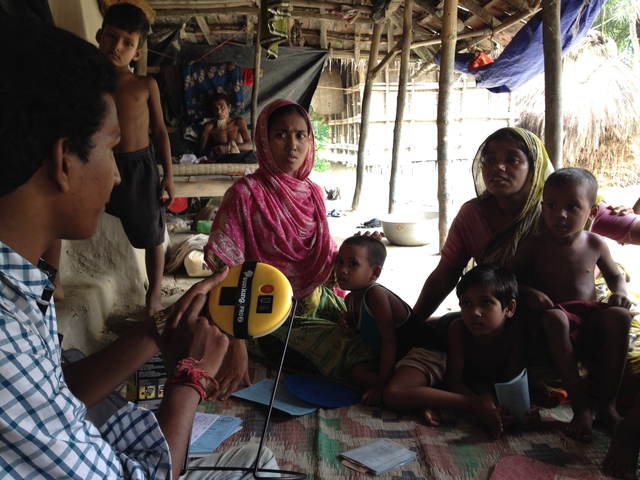