This 13-Year-Old Girl Who Escaped Death, Cannot Fight Her Grade 4 Tumor Any More Without Help

“My daughter has been through twice as much as what any human can endure and still hasn’t given up yet, even though her brain tumor was in its final stage. She is too weak to even speak. I know that she’ll get better with treatment and after all this, if she hasn’t lost hope, as her mother, how can I give up?” – Basanti, Susmita’s mother.

“After many cycles of radiotherapy, for 2 days, she just wouldn’t open her eyes. She wouldn’t move even if we called her and she didn’t eat anything. She was taken to the ICU and the doctor said that there was no hope. She fought for 15 days and she came back from the jaws of death! Nowadays, she is so weak but just about manages to talk to me. Her tumor has decreased a bit but she still needs treatment.” – Basanti.

Your support can save 13-year-old Susmita 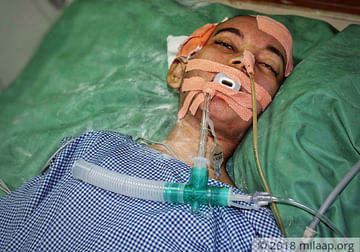 13-Year-Old Susmita's Brain Tumor Has Taken Her Close To Death, Yet She Has Not Given Up

Her mother Basanti can't wait for the day when Susmita is able to talk normally again.