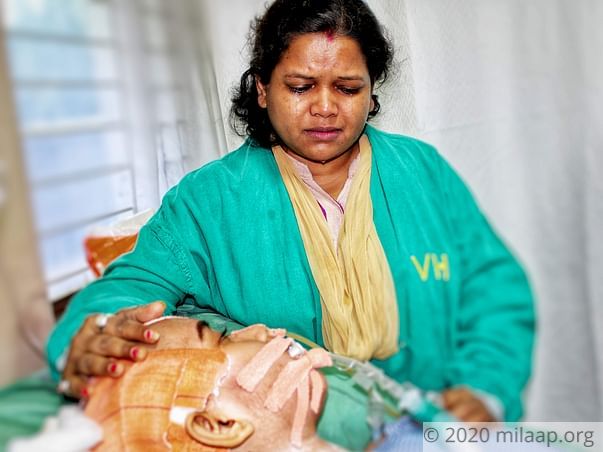 “The doctor told me that there is no hope, there is no way my daughter will survive. She has been through twice as much as what any human can endure and still hasn’t given up yet, even though her brain tumor was in its final stage. Her head is black and too weak to even speak. I know that she’ll get better with treatment and after all this, if she hasn’t lost hope, as her mother, how can I give up?” – Basanti, Susmita’s mother.

“After many cycles of radiotherapy, for 2 days, she just wouldn’t open her eyes. She wouldn’t move even if we called her and she didn’t eat anything. She was taken to the ICU and the doctor said that there was no hope. She fought for 15 days and she came back from the jaws of death! Nowadays, she is so weak but just about manages to talk to me. Her tumor has decreased a bit but she’s still so critical. God knows how much more she has to suffer.” – Basanti.

UPI: rzpy.givetomlpsusmitac001@hdfcbank (Copy to clipboard)
Or
Click here to read the instructions before you make a bank transfer. 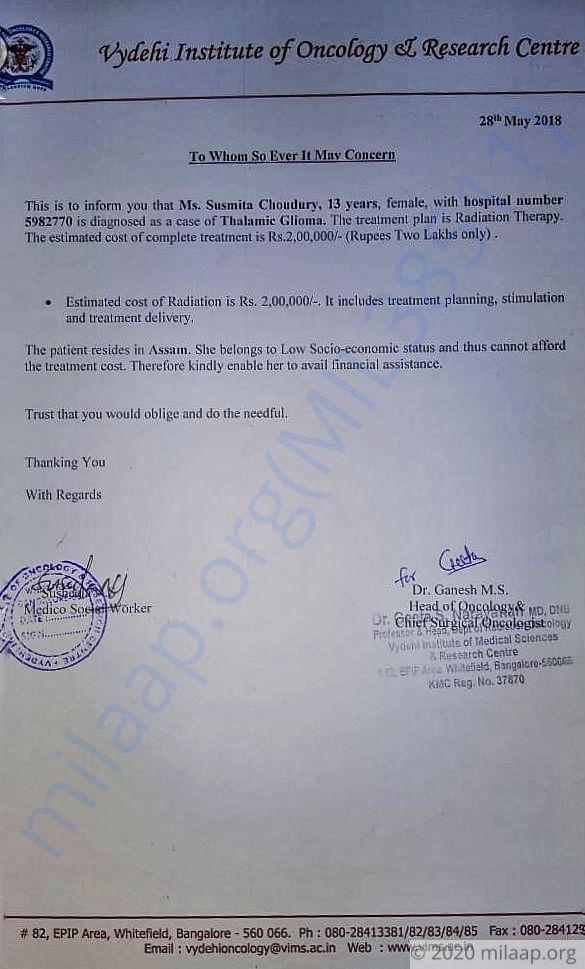 UPI: rzpy.givetomlpsusmitac001@hdfcbank (Copy to clipboard)
Or
Click here to read the instructions before you make a bank transfer.

Here is a quick update on Susmita's health.

Currently, she is at home and doing a lot better, she is on medication as prescribed by the doctors. She has to visit the hospital after two months so that doctors can track her health condition and change the dosage accordingly.

Thank you once again for the support.
Regards,
Susmita's Sister
Dear Supporters

I thank each one of you in a very special way for your generous contributions towards the treatment of Ms Sushmita Choudry. She is doing much better and has been discharged

Ms Sushmita Choudry received 35 fractions of Radiation Therapy and was discharged in good health. Thanks to all of you for alleviating the sufferings of this patient through your generous contributions.

Thanking you
With Regards
Dr Marie

Report fundraiser
See how thousands are crowdfunding for their causes on Milaap
Rs.114,289 raised

Donated to this campaign via Paytm? Click here if you can’t find your donation listed below.
A
Anonymous donated Rs.500
PM
Perumal donated $3.17

Donated to this campaign via Paytm? Click here if you can’t find your donation listed below.
A
Anonymous donated Rs.500
PM
Perumal donated $3.17 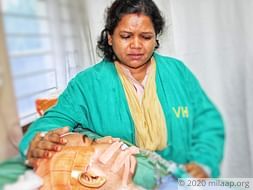