Active 4-Year-Old Paralyzed By Rare Disease Needs Treatment, But His Father Can’t Save Him On No Income | Milaap
loans added to your basket
Total : 0
Pay Now

Active 4-Year-Old Paralyzed By Rare Disease Needs Treatment, But His Father Can’t Save Him On No Income

Shares
Shares
Share on whatsapp
Yash runs into the house shouting “papa, can we have ice cream after dinner” leaving his cycle fallen at the entrance. While he runs around the house looking for Pragnesh, Jinal runs behind him trying to tell him to keep his cycle and shoes properly. This was a regular day at the Joshi household. However, after dinner, there was no ice cream, only a frantic scurry to get Yash to the hospital. Yash was terrified – he couldn’t move his legs no matter how much he tried, and no one knew what was happening to him.

Yash has been motionless in the hospital for nearly two months

Yash has Guillain-Barre Syndrome, a rare and dangerous disorder in which the body’s immune system attacks the nerves. This spreads quickly and paralysis the whole body. It’s been two months since Yash has been in the ICU on ventilator support, and his fight is still ongoing.


“We go to see him at least 4-5 times a day, and he can’t do anything but look at us helplessly. I keep thinking about how he was before this happened to him. He was so active and happy playing with his older sister. He was perfectly healthy. We've never heard of this condition before. How can such an active child suddenly lose all movement? On some days I still can't believe it. ” – Pragnesh, father.

To add to their struggles, his father lost his job

Yash needs to stay in the ICU for 2 more weeks to recover from this terrible condition. However, in an attempt to shuffle between work and hospital, Pragnesh lost his job at a private company – his family’s only source of income.

“I couldn’t be regular at work because I had to stay in the hospital. Now I have no income and I can’t continue his treatment further. I’ve already spent all my savings on his treatment over the past two months. My relatives have helped as much as they could, now I just can’t afford it.” – Pragnesh.

Yash can recover with your support

Watching their son suffer so much, Pragnesh and Jinal find themselves helpless. They often hide their tears and worry in front of their son, and although he can’t talk now, they make sure to tell him that he will be fine in no time. However, Yash needs to stay in the hospital for longer to recover. Pragnesh, the sole breadwinner of the family, doesn’t have an income to continue his treatment. Your support will go a long way in helping little Yash.

You can save Yash from this condition and help him get back on his feet again. 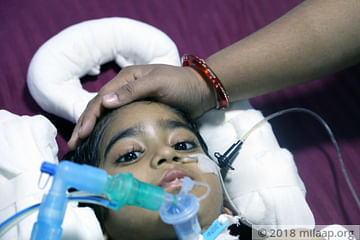 His Parents Have No Means To Continue His Treatment, Yash Needs Your Help

Yash needs to stay in the ICU longer to recover. You can help save him.