This Son Is Desperate To Save His 65-Year-Old Father Who Can’t Eat Because His Stomach is Blocked | Milaap
loans added to your basket
Total : 0
Pay Now

“My father wants to live. He doesn’t talk much anymore, but when he does he tells me that he wants to get better to meet his grandchildren and spend time with the family like before.”

It’s been 20 days since Rangaiah (65) has been able to eat any food. He was admitted to the hospital with a block in the stomach due to which he can’t eat or drink anything. It has made Rangaiah extremely weak and he needed surgery to avoid any further threats to his life. Rangaiah has slowly started having liquids, but he needs further hospital care to get completely better again.


Rangaiah with his doctor who is very concerned about his condition

Rangaiah couldn't eat or drink anything without throwing up

Rangaiah was very active for his age. He had very few health issues and lived a content life with his wife in their home in Tumkur, Karnataka. His son, Suresh, would visit them occasionally with his wife and two daughters. Rangaiah always looked forward to meeting his grandchildren and spent the day playing with them. However, Rangaiah suddenly fell sick one month ago. He couldn’t eat or drink anything without vomiting.


“He was in so much pain. He would throw up everything he ate, and we didn’t understand what was happening to him. Its’ so difficult to see my once active and healthy father deteriorate like this. He hasn’t eaten in close to a month now.”

Suresh took Rangaiah to a doctor near their village, who told him to take him to a bigger hospital in Bangalore to avoid any further complication. Rangaiah had a surgery to remove the obstruction in his stomach on 30 January. While his condition his improving, Rangaiah needs to stay in the hospital to get back on his feet again.

Rangaiah’s son has begged and borrowed to pay for his treatment, but it’s not enough

Rangaiah is a small-time farmer who makes a meagre amount. Suresh is a daily-wage worker in Bangalore and works as a painter. Work is not consistent, and days go by where Suresh doesn’t get any work. Suresh not only supports his wife and children but also his parents with the little that he earns. Both their incomes are not enough to pay for the expensive medical bills. Now, Suresh is struggling to find a way to continue treatment.

“We come from a very humble background. Even if I work for long hours, I will not be able to afford the amount needed for his treatment. My father has been my strongest support system all my life and its very difficult to see him crumble like this. My mother is constantly worried about him. I’ve begged and borrowed from many people, but I have no one else to help me now.”

Suresh has already spent Rs 60,000 on his father’s treatment by borrowing from relatives and friends. Rangaiah needs to stay in the hospital longer to start recovering. However, Suresh has nothing left. The sadness of not being able to save his father has consumed him. The only thing standing in the way of Rangaiah’s recovery is the family’s dire lack of funds.

Rangaiah had surgery to remove the obstruction in his stomach that stopped him from being able to eat or drink anything. Rangaiah is slowly improving and has started consuming liquids. He needs to stay in the hospital longer to continue treatment and remain under observation, but Suresh is struggling to keep him there. He needs your help to save his father’s life.

Your support can help Rangaiah get the treatment he needs. 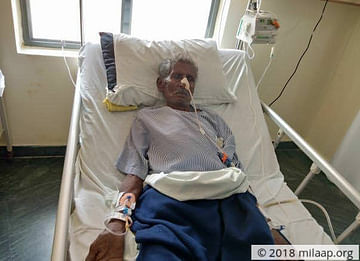 Save 65-Year-Old Rangaiah From A Serious Stomach Disorder

Rangaiah had surgery and now needs to stay in the hospital for longer to live. You can save him.