Construction Worker Has Just 15 Days To Save His 1-Year-Old From His Failing Heart | Milaap
loans added to your basket
Total : 0
Pay Now

DB
You are sending a message to
Dr. Bora
Go back

“Every time he tries to walk, he sits back down after a few steps, exhausted. He can hardly eat or drink anything, and he’s only getting weaker by the day. All he wants to do is run around and play, but our baby’s heart is giving up on him. His loud heartbeats are a reminder that he’s running out of time. His heart can stop at any moment. We’ve been trying to arrange money for his surgery for months now, but in vain. Now, he needs the surgery in the next 15 days to survive, but we’re nowhere close to being able to afford his treatment.” – Idadul, baby Sameerul’s father

As soon as Idadul puts Sameerul down on the hospital bed for his routine check-up, his piercing cries breaks the silence of the hospital. Idadul and Sumi do their best to stay strong, but for months now, all they’ve heard is their baby crying out in pain because of his severe heart disease. Baby Sameerul’s pain and misery can end with a surgery, but he needs it immediately to survive.

Sameerul has a large opening between two blood vessels leading from the heart.  The oxygen-rich blood that should go to the body is recirculated in the lungs, causing severe breathlessness, poor eating and failure to thrive. Sameerul was diagnosed with the disorder when he was just 3-months-old. He has been surviving on medicines so far, but it isn’t enough to keep him alive any longer.


“His symptoms are only getting worse with each day. Even when its cold, our baby sweats profusely. He struggles to breathe even with a little activity and is losing weight constantly. He cries all day. I try to distract him by showing him his favourite toy car or taking him outside so that he forgets his pain, even if its for a few minutes. But, in no time, he’s crying again. It’s painful to watch our baby go through so much. Even though there’s hope, I worry every day that we will be the reason our son loses his battle with heart disease.”

If the surgery Is delayed any further, they risk losing their only child

Baby Sameerul needs surgery at the earliest to survive his worsening heart condition. However, Idadul and Sumi don’t have the means to afford it. Idadul is a daily wager, working in construction and earns around 200 per day. All his money goes into their daily expenses. With no savings and no one to lean on, he’s struggling.


“We’ve already delayed his treatment for too long now because of our financial difficulties. Now, he doesn’t have too much time. We tried our best to arrange for funds, but everyone we know also earns just a few hundred in a day. We’ve only been able to afford his tests. 1.6 lakhs for his surgery is more than what we can afford.”

Baby Sameerul needs an urgent heart surgery to survive. Every day, his heart disorder is only making him weaker and putting him more pain. When Idadul is not working, he’s trying to find a way to afford the surgery. Sameerul’s grandfather, Sabir, often takes him to the hospital. But there’s only so much they can all go. Without surgery in the next two weeks, baby Sameerul won’t make it. His family needs your help to afford the life-saving surgery and save their only child.

Your support will save baby Sameerul’s life. 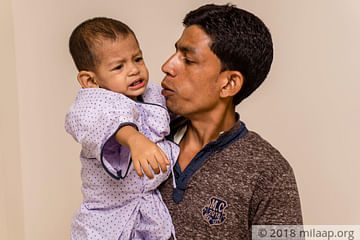 If His Surgery Is Delayed Any Further, They Will Lose Their Only Child

Baby Sameerul needs urgent surgery to survive. You can help save his life.