You are sending a message to
Panneeru Teja
Go back

"My son was all set to become a police constable. After a tragic accident, he did not recognize us. He would hit and push us away the moment we entered the ICU room. He would yell 'who are you? leave me alone!'. I knew he was scared. I used to sit in a corner and tell him the stories he loved to hear and remind him the moments from the past. After I finished he would tell me that I was lying. I would run out the ICU and cry until I am exhausted. No mother should ever go through this agonizing pain. After 15 days, when we thought we got him back, but his condition deteriorated. Now we have just 2 days left to save him" - Lakshmi, Krishna's mother.

Krishna was a sports enthusiast who won many medals in boat race competitions during his graduation. He was very ambitious to become a constable in the police department. He was all set for the job he was aiming for but the twisted fate had other plans for him. A few months ago, Krishna and his friend were on the way to home at midnight. They went to give medicines for a friend who was ill. Suddenly a drunk driver crashed into their bike. While his friend escaped with minor injuries, Krishna was unconscious after his head badly hit the ground. He was profusely bleeding and his friend admitted him to the nearest hospital.


"My son was in the state of coma for many days. We did not know whether he would live or die. He looked lifeless on the bed without any movement in his body. He wouldn't respond to any treatment. And every day his condition would only become more critical. My relatives were preparing me to give up hopes but I refused to listen to anyone. My husband and I held on to each other and prayed and waited restlessly only to hear my son shout 'amma, nana'." - Lakshmi.

Part of his skull has been removed, only a surgery in 2 days will save his life

Krishna underwent a urgent brain surgery to remove the blood clots on the day he met with an accident. The injured skull bone on the right side of his brain was removed and placed in his stomach to let the brain swell to avoid compression which was the last resort to help him survive. But he is not out of danger yet. Krishna urgently needs, cranioplasty, a surgical procedure to repair irregularities or imperfections in the skull and to replace the skull in the brain without which Krishna may never live long.

"He slowly began to recognize us after 15 days and he allowed us to touch him. All day he stared at himself in the mirror and asked us what happened to him. We were told not to tell him anything about the accident because he should not have any mental pressure at this time. We lied to him that he slipped from the stairs and hurt himself. Fortunately, the hair has grown on his head where he underwent the surgery. This accident has also fractured his right hand, he is unable to even move it. He often cries with horrible stomach and head pain. My heart breaks to see my young son who was always active to suffer from terrible pain like this." - Lakshmi.

Parents had to stop their daughter's education to afford his treatment

Devareddy is a commercial goods vehicle driver who earns Rs 10,000 a month and Lakshmi worked as a peon in a school for Rs 6,000 a month. But she lost her job after she was unable to go to work after her son's accident. While in the emergency, to save their son the couple have borrowed a huge sum of money from their relatives and friends. They have spent 15 lakhs till now.  Now the family is neck-deep in debt and cannot afford the surgery that costs 10 lakhs.


"We were not prepared for any of this. We had no savings left as we have invested everything we had in his police training and our younger daughter's education. We have forced her to discontinue her graduation, in hope to afford his surgery. Despite saving every penny, we are not even able to purchase medicines for him. In this less time and with my minimal earnings I cannot save my son. Please help our son survive, we cannot imagine a life without him." - Lakshmi.

23-year-old Krishna met with a fatal accident which left him with a major head injury. He urgently needs a surgery to repair imperfections in his skull and to replace it in his brain. During his first surgery, a part of his skull was placed in his stomach to avoid compression in the brain. The poor parents are helpless and are in dire need of help to save their son. Only 2 days are left for the surgery that can help Krishna survive.

Your contribution can save Krishna 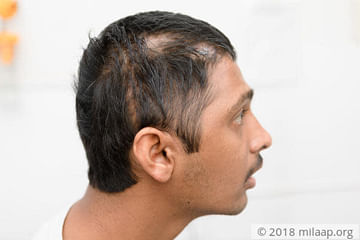 Without a surgery in 2 days, this 23-year-old may not live

UPI: rzpy.givetomlpsaikrish003@hdfcbank (Copy to clipboard)
Or
Click here to read the instructions before you make a bank transfer.