10-Month-Old Baby Rudra's Failing Heart Can Only Be Cured By An Urgent Surgery In Few Hours | Milaap
loans added to your basket
Total : 0
Pay Now

Shares
Shares
Share on whatsapp
As Sonia laid down baby Rudra (10 months) the bed after bathing him, she smiled looking at his beautiful face that gleamed in the winter sun. She went inside to bring his sweater but was shocked to see the sight when she came out. Rudra was unable to breathe and was gasping for breath. His eyes were shut close and his lips and nails had started turning slightly blue. Sonia screamed out to her husband, Ravi. They left for the hospital that very instant, praying in their heart that their only child survives this critical condition.

“Soon after Rudra was born to us, we noticed that he has difficulty in breathing. We consulted the doctors who told us that our son was born with a defect in his heart. He needs three surgery and the first one was carried out in February, this year. We were told that he wouldn’t need a second one in at least 2 years. But now, he needs a heart surgery at the earliest - without this, we shall lose our only child,” - Ravi, father.

A few days back, Sonia noticed that Rudra was coughing and sneezing. He was also running a temperature. Ravi and Sonia took him to a doctor and thought that it was nothing more than the chilly Delhi winter that has gotten to their son. But they got a rude shock when they saw Rudra going through the severe breathing trouble.

“He is in the ICU now, waiting for his surgery to be done and the only image that comes to my mind is that of his smiling face. Every time, I was there in front of him, he would always try to say something and want to be held. Now he is always crying, wincing in pain. The discomfort doesn’t allow him to sleep well at night. I look at his little frail body and feel utterly helpless that I am unable to do anything.”

Little Rudra has been sick since he was born. His parents have been in constant worry for their little son. They needed to take him to hospital for regular checkups - almost in every week. Ravi, who used to work in a private company, wasn’t able to juggle his work and looking after his baby boy. In a turn of fate, he lost his job that was the only source of income for his family. Now his baby needs a surgery worth Rs 3 lakhs, but there is no way he can afford it without help.

10-month-old Rudra is in urgent need of a heart surgery. But Ravi and Sonia are too poor to afford the surgery that can save their baby boy’s life. However, a small gesture on your part can give little Rudra a second chance at life and take away the young parents’ worries.

Your kind support can save this baby's life 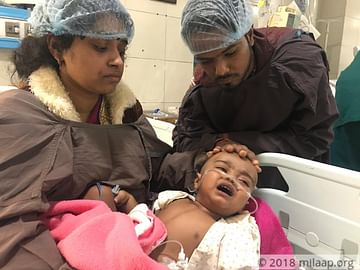 Rudra is suffering from a congenital heart defect and needs surgery

UPI: givetoraviyadav@yesbankltd (Copy to clipboard)
Or
Click here to read the instructions before you make a bank transfer.