A Bike Accident Has Left This Teenager With Severe Brain Injury And He Will Die Without Urgent Treatment | Milaap
loans added to your basket
Total : 0
Pay Now

“It was just another Friday morning for all of us. My son, Rishab had already left for his school; he is a 12th standard commerce student. I was on my way to the temple for my morning prayers. Suddenly my phone rang. I usually don’t carry my phone while going to the temple but that day I did. I picked up the phone to get the shock of my life - my son has met with an accident and he was being taken to the hospital. I remember the voice on the other side of the phone telling me something more but all I could think about was Rishab’s face when we had left home that morning.” - Rajesh Chowdhury, father of 16-year-old Rishab.

Rishab was on his friend’s bike when the vehicle hit a divider on the road and met with a severe accident. The boys fell from the bike and broke their arms. While his friend had some minor injuries, Rishab himself suffered a severe brain injury. He also had multiple bone fractures on his hands and face that need to be fixed.

The doctors have performed a decompressive craniectomy on his brain. It is a neurosurgical procedure in which part of the skull is removed to allow a swelling brain room to expand without being squeezed. But he is still not out of danger. He needs to stay in the ICU for a minimum of 2 weeks.

“The rising number of road accidents had scared us and so we decided to not give Rishab a bike till he grows a little older. But fate had other plans for us. Later, after we had admitted him in the hospital we got to know of the entire episode. His friends had asked him to get down from the school bus as they offered him a ride to the school. He initially said no but then after thinking that it would be a faster way to reach school, he agreed. Only if he had decided to stay in the bus that day, things would have been so different now.”

Rajesh used to work in a factory in Bihar and earn a meager salary. But for the last few months, the factory has been shut down and he is out of job. He was the sole earning member of his family who has been managing everything single-handedly.

“I have already spent around 7 lakhs for my son’s treatment. But the doctors are saying that he needs to stay in the ICU for at least 2 more weeks, 10 lakhs is needed for this. I cannot think of any way by which I can arrange for so much money. Tears swell up in my eyes as I see my son lying down on the hospital bed, unconscious. Again and again, his smiling face flashes in my mind, only God knows when I will see him like that again.”

16-year-old Rishab has met with a terrible road accident and has suffered a life-threatening brain injury. He needs to stay in the ICU for another 2 weeks to get better and a lead a normal life. Your kind help can save the life of this teenager with a bright future.

Your kind contribution can bring back the smile on Rishab's face 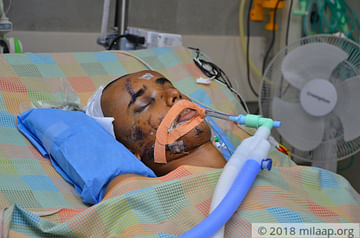 A nearly fatal bike accident has endangered Rishab's life. He needs your help to get the treatment