Boy Unable To Recognize Himself After Being Hit By Cancer At 17 | Milaap
loans added to your basket
Total : 0
Pay Now

Shares
Shares
Share on whatsapp
When Raghul first stepped into the cancer ward, he saw many boys and girls his age – some had lost all their hair, some were crying, the others lying on the bed, weak. He did not know that this would become his world too. He has seen children leave the hospital with a smile on their faces. He has also seen some die. He wonders if he can ever go home. He wonders if he would ever see his face again in the mirror.

Raghul (17) loves to play cricket and watch movies but this year he took an oath to stay away from all of this and prepare for his 12th board exams. One day, when he came back from school he complained of severe leg ache. At night, his legs started swelling. After 4 days, his parents, Raman and Baby took him to a local hospital where they were shocked to find out he has bone cancer.

"We left him at home and went to another hospital with the reports. We decided not to tell him but when we came home with swollen eyes, after hours of crying, he knew something was serious. When the doctors explained about the treatment, the only thing he asked is if he can write his exams this year." - Raman, Father.

He doesn’t want his friends to see him this way

After 2 cycles of chemotherapy, Raghul looked into the mirror and froze. His parents did not let him see his reflection all these days. He was already upset that his hair was falling out. He could not believe it was his face. He does not want anyone at school to know that he has cancer. He does not even talk to his friends. Cancer has made him a recluse.

‘He is slowly recovering, and I want to help him’

Raghul still needs more chemotherapy, surgery, and radiation to be cancer-free. Raman recently spent all his savings on his daughter’s wedding. He feels helpless with Rs. 12 lakh medical expense for Raghul.


"We were never prepared for this. I have done everything that is possible, from selling everything we had to asking money from everyone we know, but it is not enough. I have told him that he can write his exams in a few months, but how will he recover without treatment? " - Raman.

Cancer has swallowed him whole and he is fighting to get rid of it. Every day he recovers gives him hope and you can help save him. 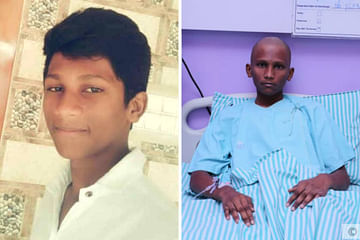 This Is His Last Chance To Beat The Disease

His parents are desperately waiting for help. You can help him win.

UPI: givetoramanfunds@yesbankltd (Copy to clipboard)
Or
Click here to read the instructions before you make a bank transfer.