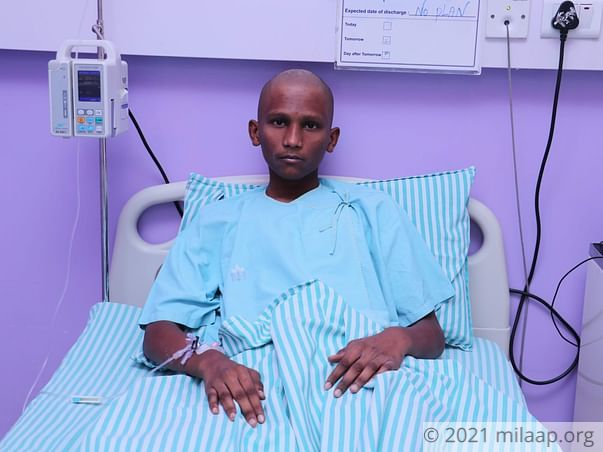 When Raghul first stepped into the cancer ward, he saw boys and girls his age around him – some had lost all their hair, some were crying, the others lying on the bed, weak. Little did he know then that this would be his world for months to come. It’s been two months since that day, and since Raghul has been cut off from his friends, school and the life he loved. He has been through so much. Along with his unbearable pain, he has seen recovery and death around him, all at once. Sometimes he wonders if he’ll ever go home, but despite everything he’s been through all he worries about are the impending board exams. He had even started looking out for best colleges in his city and for scholarships, but with the unexpected diagnosis, all his dreams have come to a standstill.

Raghul (17) loves to play cricket and watch movies but this year he took an oath to stay away from all of this and prepare for his 12th board exams. One day, when he came back from school he complained of severe leg pain. At night, his legs started swelling. After 4 days, his parents, Raman and Baby took him to a local hospital. they weren't worried. But soon they found out it was cancer 'How can a small swelling possibly be cancer? How can an active boy like him get cancer? Why him?' these were the thoughts came rushing through his parents' mind.

Raghul has been diagnosed with Osteosarcoma, a form of cancer that most often occurs in the long bones that make up the arms and legs, although it can occur in any bone. It can turn fatal without treatment.


"We left him at home and went to  another hospital with the reports. We decided not to tell him but when we came home with swollen eyes, after hours of crying, he knew something was serious. We told him he needs treatment for infections in his blood but we could not hide it from him for long. When the doctors explained about the treatment, the only thing he asked is if he can write his exams this year." - Raman, Father.

He's afraid of his friends finding out about his disease

Raghul has completed 2 chemotherapy cycles and he needs a few more cycles, surgery and radiotherapy. He is responding well to the treatment, yet he has a long way to go before he can recover completely. With hardly a few months left for his board exams, Raghul feels defeated and he is scared that he will not be able to write the papers. He did not want anyone at school to know that he has cancer. He has become a recluse and doesn't talk to even his closest friends. He is extremely conscious about losing all his hair. Cancer has changed him entirely.

An old photo of Raghul

Raman works at a garment factory and earns a very meager income which was enough only for their basic needs. After years of hard work, he managed to save some money for his older daughter's wedding, but now he has spent it all. Now he needs Rs 12 lakh for the treatment but he has nothing left with him.

"We were never prepared for this. I have done everything that is possible, from selling everything we had to asking money from everyone we know, but it is not enough. I have told him that he can write his exams in a few months, but how will he recover without treatment? " - Raman.

Raghul with his parents and older sisters

You can help him fight cancer

Raghul’s diagnosis has left the entire family in a state of shock, but with chemotherapy, he can fight the disease and go back home healthy again. Raghul misses going to school and meeting his friends. He misses how active he used to be and all that he could do. All he wants it to work hard and prosper – you can give him a chance at a cancer-free life.