This 5-year-old Is Afraid To Brush His Teeth As His Bleeding Gums Could Kill Him | Milaap
loans added to your basket
Total : 0
Pay Now

Shares
Shares
Share on whatsapp
6 long months of painful injections and even longer periods of blood transfusions have made Priyanshu very cranky. He screams and shouts at his parents at the slightest drop of the hat. He wants to go back home but Priyanshu is unaware that if he doesn’t get treatment, a severe blood disease can take away his life.  He has Aplastic Anaemia - a disease in which the bone marrow gets damaged and the body stops producing enough new blood cells.

“He wanted to have an extra ice-cream that day, he wouldn't have it any other way. We agreed but when he had fever later that night, we were angry and anxious. But we never thought it would turn out to be something so dangerous. Tests showed that his platelet and blood count was very low. Doctors told us to take him to Mumbai immediately,” - Tarkeshwar, father.

Priyanshu has had multiple platelet and blood transfusions since April last year. When they didn’t seem to make him better, the doctors suggested some injections but in vain. This January, they finally told Beena and Tarkeshwar that their son’s only hope is a bone marrow transplant.

“He is scared to brush his teeth because he is bleeding from his gums. He is scared to even look at the mirror. They are saying that the transplant can make him better - that it is his only chance. I hope we are able to gather the funds.” - Beena, mother.

‘I have no place to stay in this new city, we have been living in dharamsalas'

Tarkeshwar is a farmer in a small village in Jharkhand who is at a loss in fast-paced Mumbai. The little money he came with is now over and he has been staying in dharamsalas in with his wife since then. There are nights when they skip their meals, because they can't afford it.

“Beena and I both are both willing to be the donor and are waiting for our test results to come. But we would need 21 lakhs for the transplant. I have already spent more than 4 lakhs. We are looking up to you for help,” - Tarkeshwar. 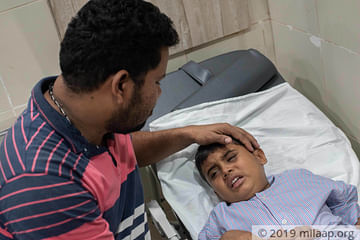 For 6 Months He Is Surviving On Painful Injections

He is extremely tired and weak. All he wants is to go home.

UPI: rzpy.givetomlppriyansh009@hdfcbank (Copy to clipboard)
Or
Click here to read the instructions before you make a bank transfer.