After Losing A Child, This Laborer Is Now Struggling To Save His 16-Year-Old From Cancer | Milaap
loans added to your basket
Total : 0
Pay Now

After Losing A Child, This Laborer Is Now Struggling To Save His 16-Year-Old From Cancer

"My son who used to run around the village happily is now bedridden in a hospital unable to even move his leg. After his younger brother accidentally slipped into a well and died, he stopped expressing his pain to us. He cries daily until he is exhausted and it is difficult to differentiate between his physical pain and mental agony. As the days pass by, a sinking feeling is killing me to see his condition as I cannot afford to lose another son," - Gurunathan, Praveen's father.

Even before this family could recover from the loss of a son, they are on the brink of losing another

Praveen was an ambitious young boy with bright hopes for the future. He always scored highest in his class. He aimed to be an agriculturist and had a curious mind about the use of technology. Instead of struggling to build a career, he is fighting for his life.

"It all started with a swelling on his neck and armpits. We thought it was an ant bite but the swelling was almost to the size of a small ball. We consulted a doctor who tested the lump and told us that he is suffering from cancer. We didn't even know what it meant, with the help of the doctor we understood that the disease is a threat to my son's life. We panicked and did not know what to do but we understood that any further delay will worsen his condition so we immediately admitted him in the hospital," - Gurunathan.

Without treatment, Praveen will lose his life to cancer

This 16-year-old is suffering from T-cell acute lymphoblastic leukemia (T-ALL), a severe form of blood cancer which leads to an aggressive growth of immature white blood cells in the blood and bone marrow. Praveen requires 8 months of intensive chemotherapy without which he will not survive.

"It is difficult to watch him struggle to read and write which he likes to do the most. At times, he is too weak to even hold a paper. I wish my wife or I knew how to read, we could have made him feel better. We often find him helplessly laying on a bed with tears running down his eyes. At times, he asks his mother if he will ever be able to step into an agricultural land, it deeply hurts to see my ambitious son fighting to survive," - Gurunathan.

Gurunathan is a daily wage laborer who struggles to run his family on his daily income of Rs 100. His shoulders are unable to bear the burden of medical expenses. He has already spent 1.5 lakhs and the family is neck-deep in debt. He cannot afford to continue the treatment that can save his son from certain death.

"We have started the treatment urgently without giving a second thought about the expenses. I sold the only land that I owned, but even after that, I wasn't able to reach the requirement, so I borrowed a huge sum of money from my relatives and friends. I somehow managed to keep him alive but now I am helpless in every way to continue his treatment,"  - Gurunathan.

Before this family could gather their wits from the loss of a son, fate hit a cruel blow as Praveen is fighting for his life with severe cancer. The family needs 10 lakhs to help their only son survive. Your kind contribution will help Praveen live a life he deserves.

Your support can save Praveen's life 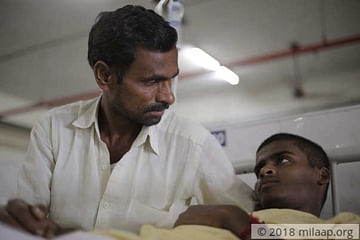 Without urgent treatment, Praveen will lose his life to cancer

UPI: rzpy.givetomlppraveen0004@hdfcbank (Copy to clipboard)
Or
Click here to read the instructions before you make a bank transfer.