This Poor Bus Conductor Needs Your Support To Save His Daughter From Kidney Failure | Milaap
loans added to your basket
Total : 0
Pay Now

Shares
Shares
Share on whatsapp
Ramesh is a B.E.S.T bus conductor whose is struggling on a meager income to afford a kidney transplant for his 16-year-old daughter, Pratisksha. For the last few months, he has had a hard time saving up for the transplant. So, when the bus drivers called for a strike in the month of January in Mumbai, demanding a pay hike, he supported them wholeheartedly.

“But even those 9 days when we didn’t work as a mark of protest, I became anxious thinking that I am losing out on my daily income. These days, all my waking hours are spent thinking about how I can arrange for the treatment,” - Ramesh.

All of a sudden Pratiksha’s condition worsened this July

Severe urinary tract infections and stomach pain, a year back, prompted Ramesh and her wife, Suvarana, to take Pratiksha to the doctor. She was under medication for one year and her condition was under control.

“But one morning in July, I woke up to the sound of Pratiksha groaning in pain beside me. She said she had severe stomach ache and soon she she started vomiting. We thought it was indigestion but when she became unconscious, we got scared. We took her to the hospitals and tests revealed that my daughter has end stage kidney disease," - Suvarana.

16-year-old Pratiksha suffers from body ache and often runs a temperature. Her medical condition doesn’t allow her to go outside. But while she is in the house, she doesn’t while away her time feeling upset. She helps her younger brother, Om with his studies and sometimes even reads up new things available on the internet. She wants to help her mother in the housework but her elder sisters, Priyanka and Sarika, don’t let her do that.

The siblings having a good time together - an old pic

Suvarana is willing to be the donor but the family is no longer in a position to arrange for Rs 7.5 lakhs for the kidney transplant.

“She loves dancing; she has performed so many times in her school. Sometimes, when she watches dance reality shows on the TV, I see how much she misses the fun and excitement. I just wish she gets better soon but with the house rent, Om’s treatment, we are so much in debt that it seems impossible without help. Only if you extend your helping hand can we even think of getting her the transplant," - Ramesh.

Your support can help this poor bus conductor save his daughter 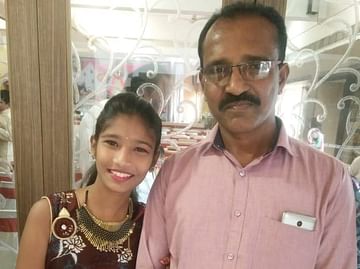