This Father Is Helpless In The Face Of His Son's Rapidly Spreading Cancer, Needs Help For His Urgent Transplant | Milaap
loans added to your basket
Total : 0
Pay Now

This Father Is Helpless In The Face Of His Son's Rapidly Spreading Cancer, Needs Help For His Urgent Transplant

“Every evening, he asks me to carry him outside, so he can sit by the door and watch his friends play. He says ‘appa, I will get better soon and play again, won’t I?’ and all I can do is force a smile. Cancer is making him weaker by the day. My son doesn’t know that the tumour in his leg can kill him without treatment. He thinks it won’t be long before he’s back to school again. He’s too young to understand what cancer can do. We’re trying to stay positive for him, but with little left to continue his treatment, we’re slowly losing faith.” – Shivanna, Nuthan’s father

Every morning, Nuthan (8) wakes up and calls out to his father, who then carries him to the bathroom. Once full of energy, Nuthan now struggles to even sit up without help. Bone cancer has made him extremely weak and without treatment, he won’t make it. Nuthan needs chemotherapy and a surgery to beat cancer, but after months of tests and treatment, Shivanna is struggling to save him.

Ever since Nuthan fell off his cycle while playing three months ago, the pain in his left leg has been recurring. When it didn’t subside despite medication, Shivanna and Vinutha began to worry.

“We took him to a local clinic, where his leg was bandaged. Nuthan continued to go to school and play as usual. He complained of pain, but it didn’t stop him from doing what he loved. We didn’t know that there was a tumour growing in his body. One day, the pain was so bad that he spent the whole day crying. We then found out he has cancer. But it’s only in the last one week that my wife has come to terms with it. It broke her. She was quiet and cried herself to sleep every night. We never show Nuthan how worried we are. He thinks it’s a small wound, and that’s the only thing keeping him positive.”

With timely treatment, Nuthan can go back to the childhood he once knew and loved

Nuthan has completed one cycle of chemotherapy so far and has seven more cycles left. He also needs a surgery to remove the tumour in his left leg. Shivanna did everything he could to immediately start treatment. Every time Nuthan is in the hospital, he asks his father if he can complete his homework and send it to school with his friend. All he wants is a normal childhood, like the one he had before cancer took over his life. Nuthan can make it with timely treatment. The only thing standing in his way is his helpless parents’ financial condition.

With each passing day, Shivanna and Vunitha’s worries are only increasing. While they’ve spent nearly 1.5 lakhs to start his treatment, they have no way to afford 10 lakhs needed for his chemotherapy and surgery. Shivanna works in a small tools shop and Vinutha works as a receptionist. Between frequent hospitals visits and work, they’re struggling to keep up with his mounting medical bills.


“We’re from a very humble background. Our relatives are all daily wagers, and helped us as much as they could. Every day I wake up with only one thing on my mind - to somehow find a way to keep his treatment going till the next week. Week after week, we struggle. Now we've exhausted everything we had. But now we’re running out of money to continue his treatment and can’t save our son without help.”

As Nuthan lays on his bed, his younger brother runs to him, begging him to play with him at least once. As much as Nuthan wants to play, his weakness stops him. Cancer has brutally taken away the childhood and life he once knew. Timely treatment can give Nuthan back all he’s lost and can save his life, but his parents are struggling. Shivanna and Vinutha need your help to save their son from cancer.

Your support will save Nuthan’s life. 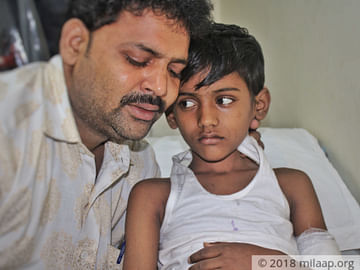 Without chemotherapy and surgery, Nuthan will lose his leg and life to cancer.