Despite Working Day And Night, This Daily Wager Can't Save His 2-Year-Old From Deadly Infection | Milaap
loans added to your basket
Total : 0
Pay Now

Despite Working Day And Night, This Daily Wager Can't Save His 2-Year-Old From Deadly Infection

“When my baby boy opened his eyes after a month in the ICU, he put his hands in his mouth, signaling to me that he is hungry. I immediately gave him some water and milk. After all, my poor child hadn’t been able to eat for a long time; he had become so weak, but still managed to call me ‘Appa’ feebly. I was happy that he kept fighting on, despite all the odds stacked against him. But sadness struck me when I realized that I don’t have enough money to continue his treatment, despite working all 7 days of the week now”-Pazhani, father of 2-year-old Niranjan Raj.

Niranjan Raj is the second son of Pazhani and Aruna Devi, who at birth, did not look like he was suffering from any major ailment. However, when he turned 3 months old, his mother noticed that he would feed very less and had trouble passing stools. A few months back, his condition worsened and on taking him to a doctor in their hometown of Pondicherry, his parents were told that their beloved baby boy was suffering from Hirschsprung’s disease, a genetic condition of the large intestine that made it difficult to pass stools. An urgent surgery was the only way he could eat and thrive normally – so Pazhani and Aruna rushed Niranjan to Chennai, leaving their 5-year-old son Hrithik Raj in the care of relatives.

“At first we thought that he was constipated. We tried feeding him simple food, like dal and rice, but he would vomit that instantly. For weeks altogether he would not pass stools and his tummy always felt hard when I touched it. My baby was always so cheerful and loved nothing more than playing with his elder brother despite his sufferings. We believed that the surgery would end them once and for all, but sadly that’s not what happened.”-Aruna Devi, mother.

This poor baby developed a deadly infection within days of his surgery, putting his life in danger

After undergoing surgery for his condition last month, Niranjan seemed fine for a few days. The doctors deemed the surgery a success and even told his parents that Niranjan could go home soon. But unexpectedly, he came down with an intestinal infection that gave way to sepsis (the body’s life-threatening response to an infection that leads to tissue damage and organ failure). Aruna and Pazhani were heartbroken; being strong believers in God, they had been praying day in and day out only for their baby’s good health. But now, he was in greater danger than he had been at the beginning.

“My wife had just sung a lullaby to put him to sleep that night. But within a few minutes, his whole body started shaking and the nurses rushed him to the ICU. For almost a month he lay unresponsive there, fighting for every breath. Seeing him in such a condition was extremely difficult – earlier when I would call out to him, he would giggle and give me a flying kiss. But at that point, my calls were met with nothing but silence.”-Pazhani, tearfully.

His son can get better with continued treatment, but Pazhani has nothing left

Pazhani works as a daily wage labourer in a leather factory in Pondicherry, earning less than Rs 10,000 despite working continuously throughout the month, without taking even a Sunday off. He was on leave for 2 months in the beginning when his son fell sick, but has now gone back to work when he exhausted Rs 30,000 he borrowed from friends. His wife and in laws have to take care of Niranjan’s needs in his absence. Niranjan is better than before and is slowly opening his eyes now, but he needs 10 days more in the hospital to fully recover. Now Pazhani finds himself in a position where his son’s hospital bills are mounting on one hand, and his expenses are increasing on the other. He is not able to keep up with either. He fears he will not be able to keep Niranjan in the hospital for long. But without treatment, Niranjan will succumb to his deadly infection.

Baby Niranjan Raj needs prolonged hospitalization to survive a deadly infection after surgery for an intestinal defect that did not let him pass stools normally. His father, a daily wager, does not have the means to save him.

Your kind contribution can save this 2-year-old’s life 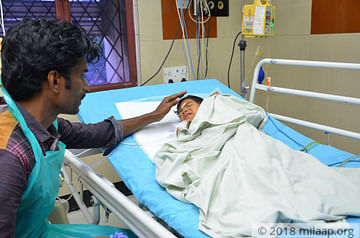 UPI: givetopazhini@yesbankltd (Copy to clipboard)
Or
Click here to read the instructions before you make a bank transfer.