Laborer Is Racing Against Time To Save 5-year-old's Dying Heart With Less Than Rs 2,000 In His Pocket | Milaap
loans added to your basket
Total : 0
Pay Now

Laborer Is Racing Against Time To Save 5-year-old's Dying Heart With Less Than Rs 2,000 In His Pocket

­ “Since the past month, my son’s condition has become so bad that he can’t walk at all. He has stopped eating altogether. We knew about his heart problem since his birth, but for 5 years, I’ve just never had the money to save him. Now, this is his last chance at having a normal life but I have less than Rs 2,000 in my pocket” – Jan, Mohammad Adi’s father

Born with a severe and complex congenital heart disease, 5-year-old Mohammad Adi hasn’t been able to undergo a corrective heart surgery since birth because of his family's poverty. Now, after such a long delay, his heart is at risk of failure and he doesn’t have long. His father, a laborer who can’t even afford to purchase medicines, is torn apart because he just cannot save his son on his meagre salary.

“Even if he manages to walk, in just 1 or 2 minutes, he sits down and tells me to carry him. He just can’t do it. He is 5-years-old, and I feel so terrible because he hasn’t been able to play anything or even run if he wanted to. His hands, legs, and parts of his torso turn extremely blue. I’ve lost sleep just worrying about how to save him but nothing seems to happen.” – Jan

This 5-year-old has been battling not one, but four deadly heart defects

Right after birth, Mohammad Adi was diagnosed with a rare congenital heart disease known tetralogy of Fallot, which is a combination of 4 severe heart defects which also includes a hole within the lower half of the heart. The 5-year-old’s body cannot receive enough oxygen due to these dangerous defects, causing him to breathe rapidly and it’s only a matter of weeks until his heart fails completely.

“He looks like a 3-year-old child. His height hasn’t increased at all. Too weak to even do anything, he just sits around next to me for most of the day. I haven’t even sent him to school because he is so sick. My wife, Gulshan, has cried so much over the years because Mohammad rarely eats. It’s not that he doesn’t want to, he just can’t because he’s suffering so much. Any mother would be devastated.” – Jan

On an average, a 5-year-old boy weighs around 19 kilos, but Mohammad weighs just 11 kilos. His inability to eat is tormenting his body. In addition to being malnourished, the 5-year-old’s only hope of survival is to get a life-saving heart surgery, which has been delayed for years, as soon as possible. His heart is at high risk of failure and Jan is so poor, that he can’t help but just watch his son’s heart die slowly unless he gets help.


Gulsha, Mohammad, and Jan at their poor home

“I work as a laborer and I don’t even get work every day. I get paid Rs. 250/day and I am able to get work just around 15 days a month. Since the past few months, I’ve been taking care of Mohammad and I couldn’t work at all. In the past 5 years, we’ve visited the hospital so many times because his condition would become so bad that he wouldn’t breathe at all. I couldn’t afford the surgery, but I couldn’t even afford to buy the medicines on time. I don’t have anything at all, all my savings have gone and my relatives are as poor as me if not worse. I don’t even have Rs. 2000 in my pocket right now. This is just so disheartening. I just don’t want to lose him due to poverty. I wish someone helps us” – Jan

In the past few years, Jan would spend everything he earned to purchase Mohammad’s life-saving medicines. Now, the 5-year-old is so critical that he just cannot survive without a surgery. Jan, unable to even afford medicines, is desperately running out of time to save his son’s life and he cannot do so without your help.

Your support will save 5-year-old Mohammad Adi and ensure that he’s able to play and go to school for the first time in his life. 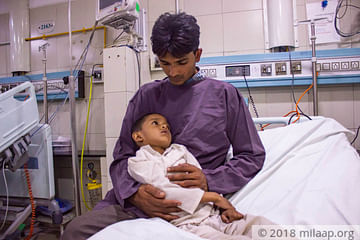 This 5-year-old Will Die Without A Heart Surgery, But His Father Can't Save Him

UPI: givetojanmohd@yesbankltd (Copy to clipboard)
Or
Click here to read the instructions before you make a bank transfer.