This Boy With A Damaged Liver Screams In Pain, Desperately Waiting For A Liver Transplant | Milaap
loans added to your basket
Total : 0
Pay Now

This Boy With A Damaged Liver Screams In Pain, Desperately Waiting For A Liver Transplant

“Tanmay has always been a fighter despite the lingering disease that he had for the last four years. Even when we shed tears of despair in front of him, he used to console us saying that he would be fine soon. We had almost started believing the same when he fell sick again. Now the doctors told us that his liver is completely damaged and he needs a transplant in the next ten days. This is his only hope now but I don't know if I can afford it.” - Jagannath, 12-year-old Tanmay's father.

Fevers, joint pains, stomach ache - all these symptoms had started making Tanmay’s life miserable since 2014. Antibiotics didn’t seem to make him any better as he kept on falling sick. Unsure about what was wrong with their youngest son, Jagannath and Yugalkishori took him to Vellore. It is there they got to know that Tanmany has Wilson’s Disease. It is a rare, inherited disease where copper accumulates in the patient’s liver, brain and other vital organs. Usually, copper is absorbed from our food, and excess is excreted through bile. But in people with Wilson's disease, copper isn't eliminated properly and instead accumulates, possibly to a life-threatening level.

“We were scared to death thinking that we might lose our son to this unknown disease. But the doctors assured us. We were told that proper medications and good food can help keep this disease at bay and that Tanmay can have a normal life. We did all of that - even then my son’s liver is damaged. He needs a transplant at the earliest or else he will not make it.”

Tanmay with his entire family of his parents' wedding anniversary

Tanmay’s condition has been worsening with every passing day. He has a swollen stomach and he quivers in pain. Sometimes he runs a temperature and also has breathing problems. The doctors in Vellore had advised the parents to take him to Mumbai. The disease is also affecting his kidneys now as he is having a serious problem of not being able to contain his urine.

“I can tell by his face that he is scared but he tries to be strong in front of us. Only mentions of his school and his cricket games can bring him a smile on his lips. I try to cheer him up talking about these but in my heart I know that if I am unable to afford the transplant, we shall lose him.”

Buried under mountains of debt, this shopkeeper has no one to turn to for support

Jagannath has a small kirana store in Bilaspur, Chhattisgarh and he is the sole earning member of his family. With his modest income, he is in no condition to afford a transplant for Tanmay. His older son, Tarun (23), is the donor but the costs are posing a major roadblock for the family.

“I have already borrowed so much from my family members, friends and even moneylenders and spent about 13 lakhs.  I am nowhere near repaying that debt but the transplant would cost me Rs 19 lakhs. How will I ever arrange for so much money?”

Jagannath and Yugalkishori were living a happy life with their children. But destiny dealt them a cruel hand when their youngest son, Tanmay was diagnosed with a rare, inherited disease. Now his liver is completely damaged and he needs a transplant. Jagannath is neck deep in debts but you can help him save his son by making a small contribution. 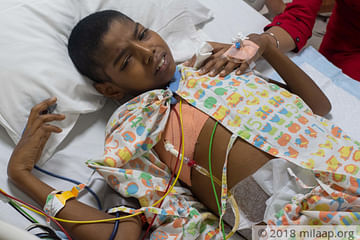 This 12-Year-Old Needs An Urgent Liver Transplant To Live

Tanmay is suffering from a rare disease that has damaged his liver completely, he needs help.