Single Mother Struggles To Save Her 16-Year-Old Who Bleeds Profusely In His Brain | Milaap
loans added to your basket
Total : 0
Pay Now

DM
You are sending a message to
Dr Mahalakshmi
Go back

“A month and a half ago, I got a call in the late night that my son was unconscious in his hostel. I panicked and immediately rushed from my village. All along the way, I was confused and crying. He never fell ill or had any history of severe health issues. All I was able to do was to pray. When I reached the hospital that he was admitted, I saw him lying on the bed motionless, I was trying to wake him up but he wouldn’t open his eyes. I was crying and begging people around to tell me what happen. They told me that my son is in a coma and they are unable to identify the cause. I lost my husband and I couldn't afford to lose him,” - Bharati, Anvesh's mother.

An unexpected stroke has turned this poor boy's life upside down

Bharati is a single mother who lost her husband in a tragic accident 9 years ago. She stayed strong and worked hard to bring up her children. Unlike her, she wanted her both sons to have a better education. After her eldest son Anvesh pursued 10th grade, she put a step forward and joined him in a college which was in a nearby district. Just when she was hoping to give her son a better future, he fell gravely ill and he is now fighting for his life.

“When they told me that he is bleeding in his brain and needs urgent surgery, I was shocked and I trembled with fear of losing him. I did not understand what to do. He is too young to struggle so much at this. I wanted to save my child, regardless of the effort I had to put in. With the help of my relatives and with the savings of the future I admitted him in the hospital." - Bharati.

16-year-old Anvesh is struggling from CVA hemorrhagic stroke and IC Bleed, a condition in which blood vessel inside the brain bursts and leaks blood and the affected part of the brain stop working correctly. He urgently needs VP shunting, a surgery that can stop the bleeding in his brain. He underwent craniotomy surgery to reduce the pressure in his brain but he is not out of danger yet. Only this second surgery will help Anvesh survive. He also requires special care in HDU and medical management.


“My son cannot breathe without the support of  the tube, the opening in his throat provides oxygen. My child is bedridden and is unable to talk or move. When he opens his eyes, he just looks at me and I see tears rolling down his eyes. He is not even able to express his pain. He gets severe headaches and sometimes it is so grave that he tightly shuts his eyes but I am unable to do anything but helplessly stand as he fights through the agonizing pain." - Bharati.

This single mother cannot save her young son without help

Bharati works as a peon in a government school. She earns as little as Rs 6,000 a month. With this minimal income, she was not only managing to run the house but also was trying to provide proper education for her children. She has exhausted all her saving on the first surgery and now she is penniless to afford the treatment that will help her son survive.


“My children are everything to me, they are my world and I cannot imagine a life without them. Anvesh was an active and bright student. He knows the struggle I was taking to bring them up. He used to always say that he would work hard to take care of me and his young brother. Now he is confined to bed and fighting for his life every second. I have tried with all my might to save him. But with a small job that I do, I cannot afford the surgery that costs around 13 lakhs to save my son.” - Bharati.

16-year-old Anvesh is struggling with bleeding in his brain which can damage the functioning of his brain. He needs an urgent surgery to control the bleeding. Bharati is a single mother with a minimal income who has exhausted all that she had in the previous treatment. Now she cannot afford the treatment that can help her son survive. 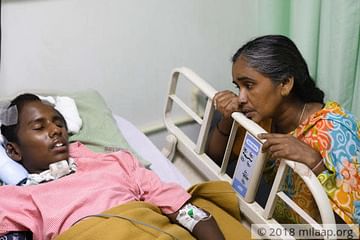 This Single Mother Cannot Save Her 16-Year-Old From Death

Only an urgent surgery can stop the bleeding in Anvesh's brain and save his life.

UPI: givetombharathi@yesbankltd (Copy to clipboard)
Or
Click here to read the instructions before you make a bank transfer.