Pregnant Mother Struggles To Save 2-Year-Old From Deadly Cancer

Shares
Shares
Share on whatsapp
2-year-old Koushik is inseparable from his mother but nowadays he sees his mother crying. He knows he will get a brother or sister soon but he doesn’t know that he has cancer. His mother, Padma, is 7 months pregnant and recently underwent a chest surgery for an ailment affecting the baby in her womb. She now lives in fear of losing him.

"The moment I came out of the operation theatre, I was told that my 2-year-old son had cancer. We have never spent a day apart, but now cancer threatens to take him away from me forever", Padma, Koushik's mother

Despite her pregnancy and post-surgery pain, this mother carries Koushik in her arms as he is too weak to even walk now

Bhumayya and Padma loved kids and always wanted to be parents. When they were blessed with Koushik, their happiness knew no bounds, But their happiness was shortlived when they were told that their son had cancer. The news came as a shock to these parents and they wasted no time to admit him in the hospital and start the treatment.


"My son is too little to die, I see that he is always afraid. It has been more than a week that he has eaten anything. The weakness has consumed him so much that he is not even able to walk. It is unbearable to see how my small child is struggling with this cruel disease," - Padma.

2-year-old Koushik is suffering from Acute lymphoblastic leukemia (ALL), a condition where an excess number of white blood cells are produced in blood and bone marrow. He urgently needs chemotherapy for two years and requires to be under observation for 3 weeks in the hospital. The parents have struggled to afford the first cycle of treatment and Koushik is waiting for the next one but the couple is unable to continue it.

"My son has developed breathing difficulty and nowadays he barely utters a word. Even if he talks for a few seconds he soon goes breathless. He cries continuously because of stomach pain the whole night and hardly sleeps during the day. I dissolve into tears when I see him cringe to the sight of injections, he hugs me tight and turns his face away. I feel completely lost and I don't know how to continue this treatment," - Padma.

Bhumayya and Padma have never seen poverty as a constraint, instead, they have always worked hard to earn their living. They worked as daily wage laborers and earned only Rs 450 a day together. They saved every penny they could to give their children a bright future. But unfortunately, when Padma was severely ill they had spent all the savings on the surgery. Now they have nothing left to save their son.


"After years of struggling, we purchased a small piece of land for our children. But we had to sell it to begin his treatment. We have also borrowed a large sum of money for his hospital stay, traveling and tests. We have spent 1.25 lakhs till date. My husband worries that there is no money for my delivery which is in the next three months. We are lost in every way, but at any cost, we want to save our son. We need 18 lakhs for his treatment, please help us," - Padma.

2-year-old Koushik is suffering from a severe form of blood cancer. Only urgent chemotherapy treatment will save him. His mother who is in her seventh month of pregnancy, and his poor father are struggling to continue his treatment. The parents have sold the only land they owned and used up all their savings. They have done everything they could and are left empty-handed. Now they are completely dependent on crowdfunding to save their son from certain death.

Your contribution can save little Koushik. 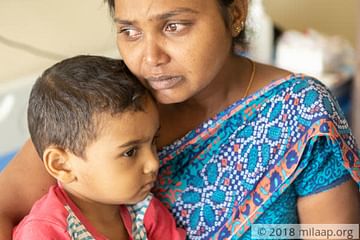 This 2-year-old will die of cancer without urgent treatment

Padma is 7 months pregnant and is in constant fear of losing his son.

UPI: givetobhumaiah@yesbankltd (Copy to clipboard)
Or
Click here to read the instructions before you make a bank transfer.