Innocent 3-Year-Old With Cancer Wants To Go Home Because He Misses The Dhoklas His Mom Makes | Milaap
loans added to your basket
Total : 0
Pay Now

“Kalpesh loves the food cooked by his mother. We can’t afford to spend a lot of money on food but whenever my wife made dhoklas and puran-polis for Kalpesh’s birthday, he used to devour them to the last bite. It is so painful to see my little son, who used to enjoy food, now not being able to eat anything at all due to his sickness. Lying down in the hospital bed all he can think about is going back to the comfort of his home.” - Bhimji, father of 3-year-old Kalpesh.

Little Kalpesh with his father and mother, Sona

Little Kalpesh enjoyed going to the fair that is set up every year near his home. And every visit to the fair meant a new toy for him. His parents would never say ‘no’ to him. But now, he is so weak that all his favorite toys are lying around him but he still doesn’t want to get up and play with them.

“All he had was just a fever that was not getting cured. Our lack of education got the better of us and we didn’t pay much attention the fever, thinking it would get better on its own. But that did not happen and we had to take him to the hospital. The doctors there told us after the tests that my little son has cancer. I was stunned - how can a child who was perfectly healthy just a few weeks ago have something as grave as cancer?”

Kalpesh has been diagnosed with Acute Lymphoblastic Leukemia. It is a form of cancer that affects the white blood cells. It occurs in the bone marrow and can quickly spread to the blood. The doctors have said that chemotherapy for a period of at least six months can cure Kalpesh. Kalpesh’s family lives in a small village in the Kutch region of Gujarat and travelling from the village to Ahmedabad for the treatment is a matter of huge expense for the family.

“We can’t afford to book a car to take our son to the hospital and have to travel by bus. At times when Kalpesh is really sick, this becomes a really big problem. He tosses and turns lying down on Sona’s lap in pain and I feel so helpless seeing him like this.”

Even after working for extra hours, the poor father can’t afford the treatment for their son

Bhimji works as a daily-wager in the farms of other people and earns around Rs 200 per day. Since Kalpesh’s diagnosis, he has been working extra hours to earn something more, his old father has also joined him. But even then he is unable to afford the treatment that can save his son’s life and make him better. He has already spent a lot on travel and starting Kalpesh’s treatment; he is in no condition to arrange for another 3 lakhs for continuing the treatment.

3-year-old Kalpesh is fighting cancer and needs 6 months of chemotherapy. He is tired and weak and often complains of body aches. His parents have been trying very hard to arrange for the money required for his treatment but are unable to do so. Your kind contribution can bring back the happiness for the parents and save little Kalpesh’s life.

Your support will save little Kalpesh 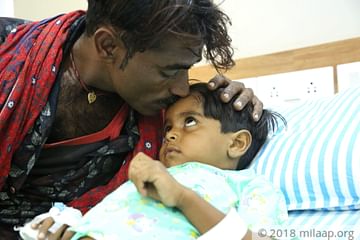 Little Kalpesh is battling cancer. He is weak and tired and his only treatment is chemotherapy.

UPI: givetobhimjijogi@yesbankltd (Copy to clipboard)
Or
Click here to read the instructions before you make a bank transfer.