Even Missing A Day Of Dialysis Could Be Fatal To This 11-Year-Old Who Needs An Urgent Kidney Transplant | Milaap
loans added to your basket
Total : 0
Pay Now

“One day we were getting ready to take him for dialysis and Kailash just refused to leave the house. He started crying so much that he just lay on the floor and shouted if anyone even went close to him. I could see the fear in eyes more than ever that day. That was when we realized how much pain he’s in and how scared he is to go to the hospital. Sadly, even dialysis can keep him going for only a little while now.”

Kailash is diagnosed with a chronic kidney disease

It was like any other Monday for Kailash as he sprang out of bed to get ready for school. He had even packed his bag the previous night like always. But when Kailash came out of his bathroom, he was scared. He ran to his mother, tears running down his face, “amma, there’s blood coming out. It’s very scary amma I don’t know what to do.” In the next one week, it only got worse - there was blood in his urine every day. Worried, Suresh and Thamarai Selvi took him to the doctor. It was almost in a flash that his condition went from bad to worse. Now, both of Kailash’s kidneys have failed and only a transplant can save him.

Kailash has chronic kidney failure and both his kidneys have now failed. For a month now, Kailash has been living on dialysis. He needs it every alternate day now, and his condition is only deteriorating. Kailash is running out of time and dialysis can prolong his life only for a short while.

“He can’t miss even one day of dialysis. The one day that we didn’t take him because he cried so much, he fell terribly sick and his entire body started swelling. It was so bad that even if we touched him, he would scream in pain."

Suresh and Thamarai almost gave up all hope when neither of them was a donor match for Kailash. They were told that a kidney transplant was imminent, but with Thamarai’s frequent seizures, she couldn’t be a donor.


“I was so upset, I thought his only chance of survival was gone because of us. The dialysis machine acts as his kidney for now, but only a new kidney can give him a future. Luckily, my mother was found to be a perfect donor match. Since she's active and healthy, there will be no threat to her life either. This is the only hope we have now, it's our only option."

Only a kidney transplant can put him out of this misery

“His urea and creatinine levels are very high. In five months my son’s condition has become so bad, that he’s now swinging between life and death. He cries all the time and every day that he makes it, is close to a miracle. We borrowed 1 lakh and started his treatment, but there is no way for us to arrange 13 lakhs. Kailash doesn’t have that much time left. He needs a transplant urgently.”

Kailash needs a kidney transplant at the earliest to survive kidney failure. His grandmother, Vijaya, is a donor match and can save his life. The only thing standing in the way of his recovery is Suresh and Thamarai's unfortunate financial situation. Kailash can be saved, but Suresh’s meager income from working in a small shop in his village isn’t enough to even continue his dialysis anymore, let alone get him a kidney transplant. Only you can help save Kailash’s life. 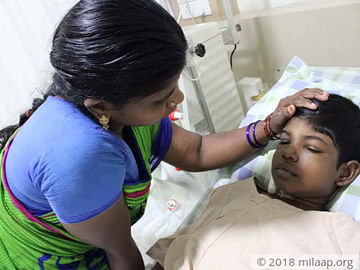 Kailash needs a kidney transplant at the earliest to survive his failing kidneys.