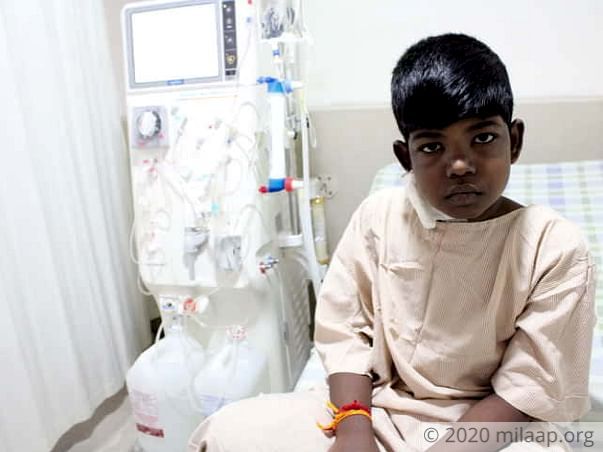 “Kailash has been on dialysis for a month now but the doctors told us that we would lose our child if we could not arrange for an immediate kidney transplant. He is in so much pain and he has lost all his energy, he hardly talks. The transplant is due in a week. If we don’t have the required fund in time, we cannot go ahead. I'll never be able to forgive myself for the rest of my life if I fail to save him. -Suresh, Kailash’s father.

It was just another Monday for Kailash as he got out of bed excitedly to get ready for school. He had even packed his bag the previous night like always. But when Kailash came out of his bathroom, he was scared. He ran to his mother, tears running down his face,

“Amma, there’s blood coming out. It’s very scary amma I don’t know what to do.”

Things have only worsened for Kailash from that day on

In a wink of an eye, Kailash’s conditions changed from bad to worse. Thamarai, Kailash's mother recalled the horrifying time and said,

"There was blood in his urine every day. We were very worried and finally decided to take him to the doctor."

To the utmost horror of the parents, the doctors told them that both the kidneys of their son have failed. The only way to save him was to carry out a kidney transplant.


“We can’t afford to miss any of his dialysis sessions. One day we could not take him to the hospital at all, because he was crying so much. But he fell terribly sick after that, his entire body started swelling. It was so bad that even if we touched him, he would scream in pain,” Suresh said.

The kidney transplant is the need of the hour and Suresh and Thamarai were shattered when they got to know that none of them could be a donor. Thamarai’s frequent seizures and Suresh’s diabetes did not allow them to be a matching donor.


“I was so upset, I thought his only chance of survival was gone because of us. The dialysis machine acts as his kidney for now, but only a new kidney can give him a future. Luckily, my mother was found to be a perfect donor match. Since she's active and healthy, there will be no threat to her life either. This is the only hope we have now, it's our only option,” Thamarai explained.

“His urea and creatinine levels are very high. We feel helpless as we see him cry out in pain and can’t do anything about it,” Suresh said as his voice choked.

They had borrowed 1 lakh when the treatment had started but the doctors have said that they would now require 13 lakhs. Suresh has not been able to go to work for the last one month, he had to be with his son for his treatment. He has no idea as to how he will arrange for such a huge amount of money unless he is being helped.

Suresh runs a small shop in his village near Chennai. He is walking a tightrope as he knows that his meager earning from his shop would never be enough to fund his son’s transplant. They can’t fund his dialysis any longer and they are desperately in need of money to ensure that their son goes back to living a healthy life. Only your help can save 11-year-old Kailash. 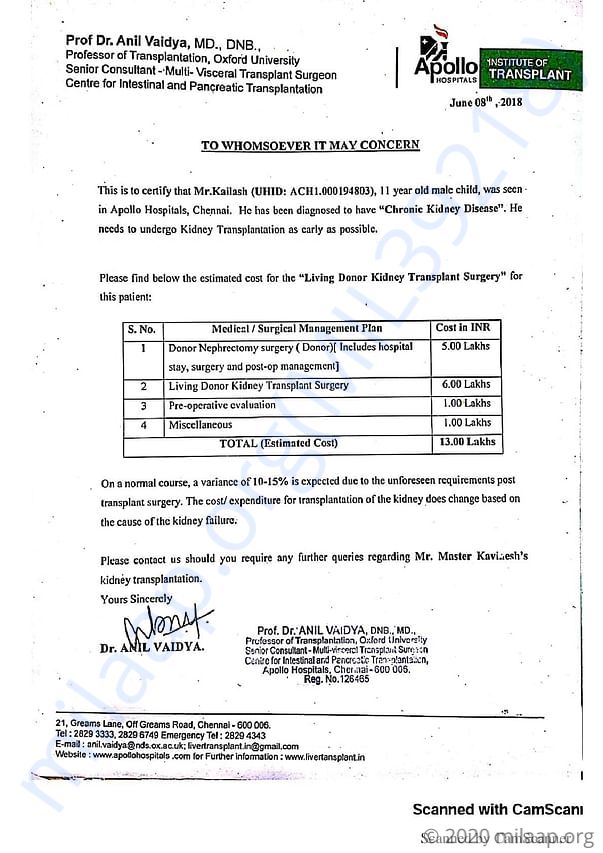 Here's a quick update on Kailash. He successfully underwent Living donor kidney transplantation and is recovering slowly. The  donor was patients  grandmother. There were no post transplant complications and he might get discharged in few days.

Thank you once again for your love and support. We shall keep you posted. Please pray for his speedy recovery.

Report fundraiser
See how thousands are crowdfunding for their causes on Milaap
Rs.66,561 raised

Praying for a speedy recovery, God Bless You.

god will be with you

Praying for a speedy recovery, God Bless You.

god will be with you 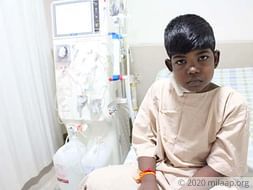