You are sending a message to
Mouny Badiginchala
Go back

3-Year-Old With Cancer Thinks The Hospital Is Her Home, Needs Urgent Help

Shares
Shares
Share on whatsapp
Jhansi has now made many friends in the cancer ward. When she's not feeling weak, she even draws with them sometimes. Jhansi was once terrified of the hospital. She would beg her father to take her back home, but over the past few months, it has become her home. She turned 3 in the hospital, and now she thinks she’s going to celebrate all her birthdays there.

Her father has slept on the hospital steps for 7 months to save her, but it's not enough

For the past 7 months, Sreekanth has spent every night sleeping outside the cancer hospital in Bangalore. He has braved the cold and rain – but for him, this is nothing compared to what his 3-year-old is going through inside the hospital. Little Jhansi has blood cancer. It’s been months of gruelling chemotherapy and numerous injections, and her fight is still not over. Sreekanth has done his best to get her treated so far, but it’s not enough.


“She thinks that the pain is part of her life now. Even though the injections still scare her, she doesn’t cry much. It’s scary to see that my daughter thinks the hospital is her home. She’s brave. We named her after Jhansi ki rani (queen), we wanted her to be fearless and strong, and she is.” - Sreekanth, father

Jhansi has undergone 4 cycles of chemotherapy so far, she needs it for the next 2 months to beat cancer for good.

As soon as Sreekanth and Shilpa found out that their child’s persistent fever was due to cancer, they wasted no time in taking her from Kurnool to Bangalore for treatment. Sreekanth had to mortgage his 2 acres of land to start her chemotherapy.

“I went there with Rs. 50,000, but it was all over in just a month. I’ve spent 1.5 lakhs on her treatment so far, it was all I could manage to borrow. I used to earn Rs. 300 per day, but I haven’t gone for work since August. Both of us have to stay in the hospital. Shilpa can’t leave Jhansi alone, and someone has to run around for the reports and bills. Getting work in Bangalore for a farmer like me is very difficult.”

Jhansi still needs to continue chemotherapy to beat cancer. Her parents have sacrificed a lot to get her treated so far, and Jhansi’s condition has improved – all of this will be in vain if Sreekanth and Shilpa can’t continue it further. They need your help to save their only child.

Little Jhansi has been away from her home and in severe pain for 7 months because of blood cancer. This is her only chance to fight it. She needs your help.

The specifics of this case have been verified by the medical team at the concerned hospital. For any clarification on the treatment or associated costs, contact the campaign organizer or the medical team.
Click here to save Jhansi 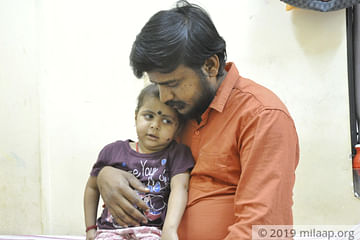 Little Jhansi Thinks The Cancer Ward Is Her Home

Jhansi needs chemotherapy to survive cancer. She can only go home with your help.