Teenager Tells His Parents To Let Him Die Of Cancer Because He Doesn't Want To Be A Burden On Them | Milaap
loans added to your basket
Total : 0
Pay Now

You are sending a message to
Anil Kumar
Go back

"When Harish’s schoolteacher called us to say that he had vomited out blood and that his condition is very critical, my husband and I knew that our worst fear had come true - his cancer was back. He was too weak to even stand up when we rushed him to the hospital. He knows we can't afford the treatment this time and keeps saying that he would rather die than see us suffer so much. But we are determined to save him,” - Laxmi, mother of 16-year-old Harish.

2 years ago when Harish had high fever that did not subside for weeks, his parents, Parvathalu and Laxmi, took him to a local hospital in their hometown Peddapalli,Telangana. Unfortunately for the teenager, his blood tests revealed that he has blood cancer. He recovered after having multiple cycles of chemo for 6 months. But 6 months of chemo had cured Harish of cancer - he had started living  a normal life. However, his happiness was short-lived exactly 9 months later, his cancer relapsed.

"He is still vomiting blood and he has lost his appetite.The severe body pain doesn't allow him to even sit up. It hurts to see him fearing death at this age." - Laxmi.

Besides the grueling chemotherapy, Harish also needs an urgent bone marrow transplant to survive. They have found a matching donor but unfortunately they have nothing left with them to afford it. Parvathalu and Laxmi are daily wagers they earn Rs 400 together. They are now staying in the hospital and struggling for every meal. They depend on the 10 rupee meal that they get from the hospital canteen.


"We had borrowed 4 lakhs from our friends and even sold a small piece of land we had for 1.5 lakhs. We had also appealed in 'Namaste Telanagna' newspaper and got Rs 15,000. But it is nowhere close to the money we need for the transplant. My son has very little time, please help me save his life." - Parvathalu 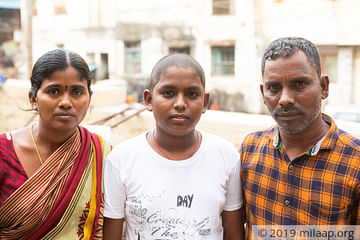 Harish is fighting cancer for the second time, this time only a bone marrow transplant can save him

UPI: givetoharisherugurala@yesbankltd (Copy to clipboard)
Or
Click here to read the instructions before you make a bank transfer.