Time Is Running Out To Save 6-month-old Boy From Dying Of Liver Failure | Milaap
loans added to your basket
Total : 0
Pay Now

“The doctor said his liver is failing, that it is too late, and we cannot do anything to save him.” – Suvarna

Within a month, Ramakrishna and Suvarna traveled to 3 cities, and over 5 hospitals hoping that at least one doctor would find a way to save their son. They were met with the same devastating diagnosis and prognosis. 6-month-old Bhojendra’s liver has been failing since birth. Now, there was nothing they could do to save him. Only recently, they discovered that he could get a liver transplant. Unfortunately, the time and money they wasted over all those hospitals has caused Bhojendra unimaginable pain and may even cost him life.

On December 10th, when Suvarna was feeding her son in the morning, she found that he had black patches on his stomach. They looked like huge blood clots, and when she gently touched his skin, he began screaming. Suvarna panicked and examined Bhojendra’s little body. She realized that there was a swelling on his head. Worried that her baby had fallen when she was not looking, he rushed him to the local doctor.

“The doctor could not find anything wrong. He just gave an ointment for the blood clot. For 10 days, we applied it. The clot only changed colors while he stopped feeding. He used to cry every night for hours. Our neighbors used to ask us what we were doing to him. Finally, I took him to a government hospital in Hyderabad where they put him in the ICU.” -  Ramakrishna

Even as he recovered from the clot, doctors said he would not survive

For 35 days, Bhojendra was in the ICU. There was a clot in his brain that could have turned fatal if he wasn’t brought to the hospital in time. When it finally dissolved, and he was discharged, the parents’ relief quickly turned into a panic on hearing he will not survive.

“They told us he had liver disease. The damage was too much and there was no way to save him. Unable to accept that, we started going to other hospitals. We wanted a second, third, fourth and even tenth opinion, if it meant that there was a way to save our son. Only in Chennai, we were told that he could be fine with a liver transplant.” - Suvarna

If only they had found this problem at birth, Bhojendra would not be battling for life now

Bhojendra was born with biliary atresia. They never investigated further when he had jaundice and kept reassuring the parents that it is normal. Within 5 months, his body was flooded with toxins, liver damaged beyond repair and caused a clot in the brain.

“He somehow survived the blood clot once. If it happens again (and it can happen anytime), he will not survive. I have already spent over 3 lakhs so far. I cannot afford 18 lakhs for his transplant. When we ran out of money, we brought our son home.” - Ramakrishna

Suvarna does not earn enough to pay for Bhojendra's surgery

Suvarna works as a teacher to support her family. Her husband, who also worked at a school, has been studying to secure a government job. For the past 40 days, neither of them went to work. As Bhojendra's condition worsens, they struggle to find the money needed to save him.


"We have applied for CMRF, but I am not sure if my son will survive till we get the grant. Even if we do get it, we will need to fund the other half of the money." - Suvarna

Any further delay can take his life. He may not survive another clot, and your contribution can save him in time. 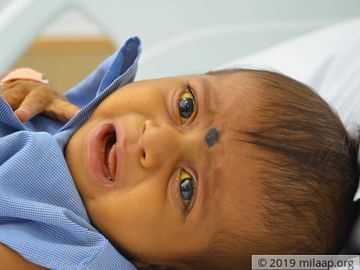 It seemed like he recovered and by the time they realized the truth, it was too late.

UPI: givetosuvarnadonations@yesbankltd (Copy to clipboard)
Or
Click here to read the instructions before you make a bank transfer.