15-Year-Old, An All-Rounder Student And Aspiring Doctor Is Battling Heart Disease For The Second Time

My son is very good at science. He wants to become a doctor. Even at this young age, he talks about helping the needy and providing medical care to people in rural areas. Many people have told us that it it a blessing to have a son like him. He is very smart for his age; I could not hide his heart condition from him for for a long time. He talks to everyone in the hospital. He found out that he needs urgent surgery but has not asked anything about it to me. I have no strength to even look in his eyes." - Arjunan, Father of Avinash.

15-year-old Avinash is in the final stage of heart failure and his every waking moment is filled with pain and anxiety. All these years his parents used to tell him different stories to take him to hospital but now this young boy, knows that his failing heart can cause death. Despite the pain and trauma, he stays strong and is determined to fight the heart disease.

Avinash, a topper in class and in sports is now struggling with a dreadful heart disease

Avinash was diagnosed with heart disease when he was just 4-years-old. His parents were terrified when he coughed continuously and struggled to breathe. He had an urgent surgery and spent a week under observation. As he grew up, they were surprised at his positive energy and his passion for science and sports. They took him to hospital every now and then for check-ups. When they were almost convinced that their son is out of danger forever, those dreadful symptoms re-appeared and they are completely shattered.

"Even walking a few steps makes him breathe rapidly. He was very happy and active. He has never missed any of his classes despite extreme tiredness. Even when we ask him to take rest, he says that only if he works hard now he can become a doctor. He was taking medicines regularly to prevent blood clots but it does not help him. Sometimes his breathing becomes too fast and he looks like he is choking." - Bhavani, Mother of Avinash.

Last month, suddenly Avinash had a terrible cold that refused to go for weeks. He was running high temperature and suddenly his breathing became rapid. His parents took him to the hospital immediately. Their nightmares became true when the doctors told his heart is failing. They refused to believe it and they took him to a hospital in Chennai and they confirmed the same. He has a hole between his heart and the tunnel that takes oxygen-poor blood from the body to the lungs. His pulmonary valve leaflets are thickened and it'll worsen over time without surgery. Doctors have said that he needs to undergo a surgery before his heart fails completely and turn fatal.

"I don't know why my son has to go through this suffering again. After his first surgery, I took proper care of him. Every time he runs, my heart skips fast, I fear that he might fall sick but he always seemed alright. Even doctors were surprised at his energy. But now everything has changed. Last month, when he had severe breathing trouble we told him he just needs some medicines but now he knows only surgery can save him." - Arjunan, Father.

Father, a poor farmer has no one to turn for help to save his son

Arjunan is a farmer who owns 1/4 acre of land in a small village near Kanchipuram district. His life as a farmer is a never-ending struggling like that of other farmers.  When there is no rainfall, there is absolutely no income and they have no other option but to starve. He has been working hard day and night to provide basic needs to his wife and his two children Avinash and Bhavani (11). He was very confident about the bright future of his children and was determined to do anything for them. But now his son's life is at risk and he is unable to do anything to save him.


"My son is close to dying, I can see him suffering everyday. My wife and my daughter cry everyday. They look at me helplessly. I give them hope, I promise them every time that I'll not let my son leave us but deep inside my heart I know I can't do anything. When he had his first surgery I borrowed from a lot of people and it took so many years to repay. Now I don't have anyone to turn for help. Now all I can do is to pray and wait for help." - Arjunan.

15-year-old Avinash, a young boy who aspires to become a doctor is now battling a dreadful heart disease for the second time. He had a surgery when he was just 4-year-old, now his heart disease has reached a final stage and he cannot survive without an urgent surgery. His father Arjunan, a poor farmer has nothing left with him to save his son. He is desperately looking for help. Only your support can save Avinash and help him live his dreams. 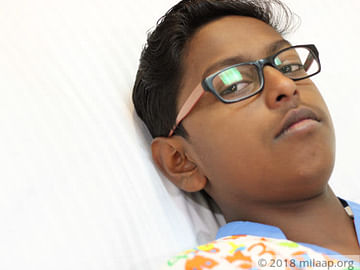 15-Year-Old Avinash Cannot Survive Without Heart Surgery, He Is Running Out Of Time

Your support can save this 15-year-old from dreadful heart disease and live his life.