This 2-Year-Old Can't Even Recognise His Own Parents Due To A Severe Disease | Milaap
loans added to your basket
Total : 0
Pay Now

Shares
Shares
Share on whatsapp
Every time Poornima put the ‘kaala tika’ on little Atanu, she hoped her baby would be guarded against all evils. But now when he is lying in the ICU, unable to breathe without ventilator support, unable to recognise anyone - she feels helpless and angry that she hasn’t been able to protect her son.

‘He hardly recognises us now - he talks very less, and even when he does he thinks we are strangers,’ says a broken-hearted Poornima.

A troubled Poornima at the hospital

Biplab, Poornima and their elder son, Aakash (12) were more than happy to celebrate Atanu’s 2nd birthday in October, last year. Little Atanu was super excited to be the centre of attraction for the day - he pranced around the house in joy despite the slight fever and the cold that he had.


“Later that night, Atanu’s condition worsened. He was struggling to breathe on his own. We got very scared and rushed him to a nearby hospital. After some preliminary tests, the doctors told us to take him to a bigger hospital with an ICU unit. We ran around for almost the entire night, with a sick child in our arms and finally got him admitted to Apollo,” - Biplab, father.

2-year-old Atanu had been diagnosed with swine flu and severe pneumonia. His condition was so severe that just after his diagnosis, the little boy had slipped into a coma for more than 60 days. Although he is out of the coma now, Atanu is exhausted because of the severity of his condition.

“When he went into coma, we thought we would never get him back - but he is out of it now, responding to medicines. However, he still needs to be on ventilator support,” - Poornima.

I sell vegetables and get Rs 200 a day - how will I pay for his hospital stay?

Biplab sells vegetables on his cart and makes very little money. His entire family, including his old parents, are dependent on him. He has been toiling hard to make the two ends meet but with Atanu’s sudden illness he is completely at a loss.

“My relatives have helped me pay a large part of my bills. I have also sold a little piece of land that I owned and paid around Rs 6 lakhs. But I need to pay Rs 10 lakhs more. Without help, it seems impossible to me,” - Biplab.

Biplab and Poornima can bring back their baby boy home if you come forward and help them. Even a small contribution from your side will make a big change in their life.

Your support can save Atanu's life 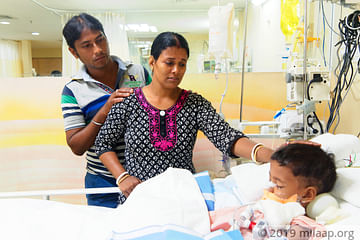 Atanu Was In Coma For 60 Long Days, He Still Needs Help