Auto Driver Is Struggling To Save His Only Child From Blood Disease | Milaap
loans added to your basket
Total : 0
Pay Now

AS
You are sending a message to
Ankit Shrimali
Go back

Shares
Shares
Share on whatsapp
Little Ariba is a bubbly little girl - her day starts with running around the house early in the morning, packing her school bag and telling her mother Nausheen what she wants for lunch. Soon after she comes home from school, she would wind up on the sofa, watching her favourite cartoons. Ariba looks normal and healthy like every other kid. Looking at her happy and ever-smiling face you will never suspect her to be the victim of a blood disease who has undergone many blood transfusions since she was just a few months old. One could never know that behind the innocent smile of little Ariba lies the endless pain and struggle that she has to go through each month because of the blood disease that will take her life if not treated on time.

Danish works as an auto driver in Mumbai to look after his wife and daughter Ariba. Little Ariba started having recurrent fevers when she was just 8 months old. Her parents thought it as a common flu and gave medicines after they’ve consulted with the doctor. However, her condition didn’t improve and Ariba’s skin started turning unusually pale. Her parents consulted the doctor again and they were told that Ariba has thalassemia, a severe blood disease that affects the body’s ability to produce haemoglobin and red blood cells. Ariba needs to undergo blood transfusions every 18 days.


Ariba is a happy child for most days of a month, until her blood levels drop

“She would look normal and happy for a few weeks of the month, but afterwards, she would get high fevers, grow weak and pale,” - Danish, father

Ariba is has been completely dependent on blood transfusions for survival all these years. But now Ariba’s condition is worsening and even the painful blood transfusions are not helping. She gets tired very easily and gasps for a breath of air every now and then. Now only a bone marrow transplant can help Ariba recover. Fortunately, her mother is a suitable donor for the transplant Ariba can have a shot at a normal life, a life free of pain and suffering that has been plaguing her ever since she was a baby.

“She knows that she has some disease and she’ll only get better after an operation. And she asks me, ‘Ammi, I don't want to go to hospital every month.' I lie to her saying that she will get operated soon. I cannot tell my daughter that we don’t have any means to afford the transplant after exhausting every rupee we had.” - Nausheen, mother

It’s been really difficult for Danish to afford blood transfusions every month for his daughter with an income of Rs 8000 per month. His income was barely enough to look after his family and every time his daughter had to undergo blood transfusions, Danish would borrow heavily from his friends and relatives. Now knowing that only a bone marrow transplant can cure his daughter's worsening condition, he sold his auto rickshaw. But the money that he got for that was only enough to look after the medical tests and now after selling his only source of income, he is struggling to arrange the money that his daughter desperately needs.

Little Ariba has never known a life without blood transfusions. She is now so used to the pain that even the 4 - 6 hour long blood transfusions do not make her cry anymore. The painful transfusions can only keep her condition from worsening for a few days. Little Ariba can only live a pain-free life with a bone marrow transplant but her parents have no money for the transplant. They can save their only daughter with your help.

Your contribution can help these parents save their daughter 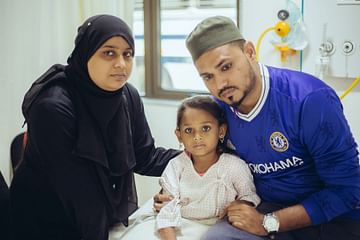