Watchman's 1-year-old Can Live Past His Second Birthday If He Gets An Urgent Heart Surgery | Milaap
loans added to your basket
Total : 0
Pay Now

“6 months ago, we were told that his surgery needs to happen as soon as possible. I’ve begged so many people to help me out but I just can’t gather the money required for his surgery. I feel defeated. Anand is so weak right now, and every time I get the feeling that I’m going to lose him any moment.” – Ruben, Anands father.

1-year-old Anand’s heart is so critical that he suffocates more and more every day. Anand has been suffering from a severe congenital heart disease since birth and his surgery has been delayed for so long because his father, a poverty-stricken watchman who is submerged in debt, has absolutely nothing left to save him.


1-year-old Anand at the hospital

“I feel terrible when I just look at his face. Unlike a normal child, he’s breathing so rapidly that he can’t even sleep at night when he’s tired. He just keeps on crying. It never stops. He’s just so critical right now and as his father, I can’t tell you how terrible I feel because I’m unable to save him.” – Ruben.

Around 6 months after birth, Anand was diagnosed with a Patent Ductus Arteriosus which is, simply put, an opening between blood vessels that leave the heart. The result is mixing of good and bad blood with less oxygen circulated in his body. This causes breathing issues and has a deadly effect on his lungs and his heart.


Anand, Sita, Anmol and Ruben outside their home

Anand’s heart is at high risk of failure

“His weight is also decreasing. He’s more than a year old but he still can’t walk. He is so weak that he won’t even crawl or move from side-to-side. He doesn’t breastfeed long too because he gets breathless. This has devastated my wife, Sita. My 6-year-old son, Anmol, watches other babies walk in our neighborhood and he keeps asking me ‘when is my brother going to walk?’. My heart just sinks. "– Ruben

In December 2017, the 1-year-old had to undergo surgery at the earliest. His condition has worsened so dramatically in the past 6 months that his heart is now, at high risk of failure. Only an immediate heart surgery will make sure that Anand survives.


Sita and Anand in their poor home

Ruben works as a watchman earning a meager sum of Rs. 200/day. His wife, Sita is a housewife and her depression seems to get worse with every day because she thinks her son is slowly dying.

“A few years ago, we had to admit Anmol to the hospital too because he had a very high fever and allergies. I had borrowed money for that and still haven’t paid it back. For Anand’s medicines and visits, I borrowed Rs. 65,000 from everyone I know. Right now, I am neck deep in debt. For the surgery, I’ve begged so many people but no one helped me out. Everyone just told me to keep praying. I am so poor and right now, I am so scared because I just can't afford so much money.” – Ruben.

1-year-old Anand will not be able to live until his second birthday unless he undergoes an urgent heart surgery, which costs Rs. 2 lakhs.  Ruben has nowhere left to go to ask for help and he has absolutely nothing left with him to save his 1-year-old son.

Your support will save 1-year-old Anand and will ensure that he will be able to breathe normally for the first time in life. 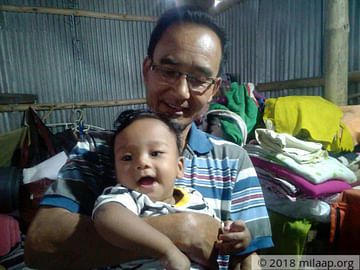 Ruben and Sita are desperate to see their 1-year-old breathe normally for the first time.

UPI: givetoruben@yesbankltd (Copy to clipboard)
Or
Click here to read the instructions before you make a bank transfer.