Shares
Shares
Share on whatsapp
“Do you want some water, son? How about a slice of apple? Eat son, or you will be weak,” a worried Shelin tells her son Akshay who refuses to get up from the bed and eat even a morsel of food nowadays. Cancer has weakened his body and mind, but his mother – who is living with a pacemaker in her chest after a heart attack almost took her life last year, is determined to bring back the old Akshay, the one who held her hand throughout her illness with a kind smile, and helped her recover. This mother has almost lost movement in her left hand, and can barely walk now, but she’s fighting beside her son in what is now the darkest period of their lives.


“After my attack, I was advised bed rest for a few weeks. Akshay stopped going to school for a few days and took care of me – he cooked, cleaned and took care of me and the house in the best possible ways a child could. He always told me, “Amma, when I’m there, you don’t have to worry about a thing”. Now it’s my turn to stay strong for him. I am determined to save him, but the treatment costs are way out of my lower-middle class family’s reach,”-Shelin

‘Will I ever be able to play football again?’

Akshay is an all-rounder student. He scores more than 80% in every exam, takes part in dancing and mimicry competitions at school festivals and the best of all – he is a sub-district level football player. “You could never find him without his ball. Even while studying, he would dribble it around, saying it helped him focus,” recalls Shelin. One day in September last year, he was coming back home from a football match when his left leg started hurting badly. It just got worse as days passed, and he even got a swelling on his left knee. A trip to many hospitals later, he was diagnosed with bone cancer.

“We didn’t tell him for many days that he had cancer. It was when we took him to the Regional Cancer Centre in Trivandrum for check-up that he understood. He remained silent for many hours, before asking if he would be able to play football again. How could I tell him that playing football again should be the least of his concerns, as his life itself was in danger. I kept my calm and told him he would be fine after undergoing treatment in Bengaluru, as advised by the doctor” - Shelin

This mother stays awake all night fearing the worst

Akshay has so far undergone 3 rounds of chemotherapy in a good hospital in Bengaluru. He is holding on despite the excruciating pain in his knee and the horrible side-effects like vomiting, but he has become a completely different person according to his mother. And this is giving her sleepless nights.

“As my two elder children have been away from home, studying elsewhere for a few years now, Akshay is my closest companion. He would always tell me each and every detail about his day. But now, he hardly talks to me. He lies in bed, lost in thoughts. I keep trying to cheer him up saying he can go home and meet his friends soon, but he doesn’t reply. I cannot sleep at night watching my son transform into a morose, unhappy soul. I fear that his negative thoughts itself will kill him,”-Shelin

Unemployed and helpless in a strange city, these parents need your help to save their son

Akshay’s father Varkey, used to work as a daily wager in a quarry in their hometown of Kannur for Rs 500 daily, until his health worsened a few months ago. His mother, Shelin also used to go for odd jobs like cleaning and cooking before her heart attack made her completely weak. The family was struggling to manage household expenses and pay their children’s fees when Akshay was diagnosed with cancer. They left to Bengaluru for treatment with some donations received from their local church. Teachers and students from Akshay’s school also helped in pooling some money. But all that has already been spent in his treatment so far. Akshay still needs chemotherapy followed by surgery to be cancer-free, but his parents are struggling to arrange enough funds.

“We do not know many people in Bengaluru. The city, the language – everything is alien to us. We are completely helpless,”- Varkey

With your kind contribution, these parents can save their son from deadly cancer 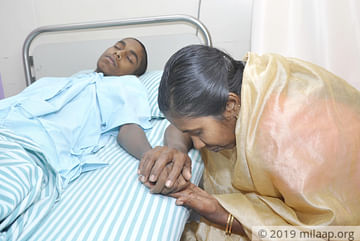 Akshay is weak and bedridden, help him become healthy again

Despite her own health issues, Akshay's mother is determined to save her son. Please support.

UPI: rzpy.givetomlpakshayva001@hdfcbank (Copy to clipboard)
Or
Click here to read the instructions before you make a bank transfer.