5-Year-Old Who Lost Movement In Her Hands And Legs Will Lose Her Life To Pneumonia Without Urgent Treatment | Milaap
loans added to your basket
Total : 0
Pay Now

Ab
You are sending a message to
Anikesh bit
Go back

“We were so happy to see her walk, even if it was with a little bit of support. We thought her body finally had the strength to carry her, but suddenly, she slipped and fell. She hurt her neck severely. In just a day, her entire body became blue as she struggled to take even a single breath. It just got worse from thereon. She can barely even move her arms and legs. She can’t even hold my hand or breathe on her own, all she does is cry out in pain."

5-year-old Abhisikta has Quadriparesis, a condition in which there’s partial loss of functioning in all four limbs. Now, she's also fighting pneumonia and respiratory failure in the PICU. Without urgent treatment, her condition will deteriorate beyond repair.

It pains Bipasha to leave Abhisikta alone for even a minute. The mental and physical exhaustion of watching her child suffer has taken over her, and she spends sleepless nights by her bedside wondering what else fate has in store for her child.

Abhisikta's struggle started when she was just 3-days-old; Now, she's lost partial functioning of her limbs

After many hours of struggle and pain, Bipasha and Ajit held their baby girl, Abhisikta, in their arms. The gave each other an assuring smile and took home a seemingly healthy baby. Unfortunately, 3 days after she was born, she stopped feeding. Her stomach had swollen up and she started getting weaker.


“She was born with a hole in her food pipe. In the next 4 days she was given 18 bottles of blood and was taken for a surgery. She was fine for 2 years after that. Those two years were the most memorable. We saw her learn to talk, walk and play. But soon things started to change. Our playful daughter’s left hand and leg started to give away. She could barely even lift a pencil. It soon affected her right hand and leg too. It's only been downhill from there.”

Abhisikta was rushed to the PICU in October 2017 for respiratory muscle paralysis due to the softening of the spinal cord and had respiratory failure, and immediately placed on ventilator support. With months of medical attention and physiotherapy, she achieved little milestones. Unfortunately, the child's misery didn't end there.

Just when her doctors and parents thought she was getting better, she got pneumonia

“During the past 8 months, there have been many times when her lungs have completely collapsed. Her movement is so restricted and all she could do was cry. But she fought hard. With physiotherapy, her movement improved. We thought her days at the hospital were finally over, but just when she was going to be discharged, she was diagnosed with pneumonia and respiratory failure. She’s back where she was 8 months ago. In the PICU on ventilator support, and this time, we have nothing left to save her.”

Abhisikta can only make it with continued PICU care for the next 2 months. After spending on her treatment for the past 8 months, Ajit and Bipasha have nothing left to continue her treatment. Ajit works in a small shop, and Abhisikta’s daily expenses are more than what he earns in a month. Despite the hospital waiving of a portion of the bill, they’re struggling. Little Abhisikta has known nothing but pain so far and needs your help to survive this and finally go home.

Your support will save Abhisikta’s life. 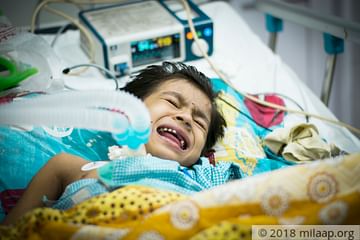 She's Lost Partial Functioning Of All Four Limbs, Without Treatment, She Will Lose Her Life

Abhisikta needs to stay in the PICU longer to fight pneumonia. She needs your support to make it.

UPI: givetoajithalder@yesbankltd (Copy to clipboard)
Or
Click here to read the instructions before you make a bank transfer.