This mother cannot speak, but her struggles to save her son from Cancer speak out loud! | Milaap

This mother cannot speak, but her struggles to save her son from Cancer speak out loud!

Shares
Shares
Share on whatsapp
Mallika is mute by birth. When Mallika gave birth to her children, no one heard her cries of pain. She could not teach her children the first word 'Amma'  Even now,when  Mallika,watches her children have those animated conversations with each other or laugh out loud., she longs to call out to them, or join in.  Even with her husband's limited income she ensured her children were educated , encouraging them to dream big. She had great hopes and aspiations for her children, and did all she could to ensure they got the best in life. But this mother is now struggling to keep her 18 year old son, Sivan Muthu, alive. He is diagnosed with cancer and is need of urgent treatment. With no money left to continue treatment, her husband is on the verge of giving up.

After several financial hurdles, Mallika finally convinced her husband to send Sivan Muthu to college. To see her son go to college was Mallika's dream. Sivan Muthu was happy to have joined a college. But that happiness didn't last long. He fell ill and was hospitalized. Recurring fever kept him away from college. Soon the family came to know that Sivan Muthu was diagnosed with blood cancer.

A small word of  consolation from Mallika could be crucial to Sivan right now. Unable to console her son by words, Mallika watches him helplessly, trying to communicate all she can to make him feel better. Sivan Muthu has been Mallika's strength after her daughter got married. He understands every gesture of hers and it breaks him to watch her helplessness.

After two months of his diagnosis, Sivan Muthu, found strength to deal with his disease. "Perhaps it was seeing my mother in such a miserable state that made me strong. It is not my fault that I have cancer. Now I laugh to cheer my mother. Her eyes light up the minute she realizes I am feeling better or if she sees a smile on my face. I want to live for my mother".

Doctors Have Recommended  A Cure For His Cancer

Sivan Muthu was referred to Meenakshi Mission hospital by the doctors who diagnosed him of cancer. After several tests and analysis, he was put on medications. But doctors have recommended a bone marrow transplant to cure him. Since they were unable to find a fully matched donor for his transplant, his sister came forward for the test and was found to be a half match. Doctors have decided to proceed with the transplant but the family hasn't been able to arrange for the money. The transplant costs 20 lakhs, and though crucial to keeping Sivan alive, is far beyond what his family can arrange.

They say " There is a joy greater than having a dream: helping someone else fulfil theirs."

A small contribution you make today could give this mother and son a lifetime of togetherness and a chance to see their dreams come true.

Make a contribution and help this mother save her son

The specifics of this case have been verified by the medical team at the concerned hospital. For any clarification on the treatment or associated costs, click here to contact the campaign organizer or the medical team.
Donate 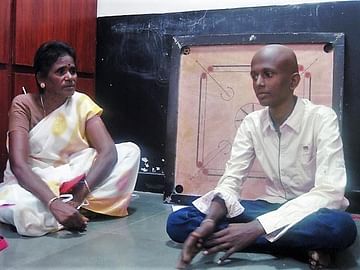 Mallika is mute, but if tears were words, she has spoken enough.

Her son has Blood cancer. Your support is her last hope.