Sayra isn't afraid to leave her house at night, thanks to her solar lantern | Milaap

Sayra isn't afraid to leave her house at night, thanks to her solar lantern

Shares
Shares
Share on whatsapp
It was a very pleasant morning when I reached Dakshin Barasat around 7 a.m. Most of the traffic on the streets was reduced to cycles and people walking to work, as a few motorcycles cruised through the foot traffic. I reached the Dakshin Barasat office of DCBS, and was greeted by Suparna, a DCBS loan officer, with whom I was going out into the field with. She decided the best way to reach the small village we were heading to would be on bicycles. I was excited, because this was now my favorite way to travel through the rural villages in the countryside of West Bengal. There is something amazing about the simplistic beauty that can be found riding past the vast swathes of land dedicated to cultivating rice and other crops.

After a peaceful ten-minute bike ride, we reached a small collection of houses on the border of the paddy fields. Here, we found a group of women called "Mayna 2" that had been associated with DCBS for about five years. Most of the women in the group had earlier taken out small loans through DCBS to start a small business to help support their families. Later, they took the solar loan to see them through frequent power cuts, so they wouldn’t lose productive hours. About half of the women in this group are involved in the tailoring trade. They are very skilled in a particular style of embroidery known as "Chikan & Zari". The leader of this group, Sayra Gazi, on the other hand produces lengths of jute rope as her business. Sayra, explained to me that she can make up to Rs. 100 per kilo of rope, or about 5 rupees for a meter of rope. From the perspective of a westerner, this amount seems very little, but in places like rural West Bengal a hundred rupees is enough to purchase a few days’ worth of groceries and other daily necessities.

"I didn't have much to do at home once my children were in school. Many of the other women in the community were deciding to work from home. I personally could not sew well, so I decided to get involved in rope making," Sayra explained to me. Her husband's meager wage from working in construction was not able to cover all of their costs, so the rope making has been able to supplement his income.  Sayra also has two children, a boy in class 7 and a girl in class 4. She wants her children to do well in school, so she has hired a tutor to meet with them everyday, "I can pay for tutoring fees through my income".

The main reason she decided to get a loan for solar lanterns was so that her children's studies were not hampered by the power outages. Also, at night, it gets extremely dark in the area, and she used to feel unsafe walking anywhere alone. Due to the portability of the lantern, she told me she or her children can take it anywhere and not worry or be afraid of the dark. "I use the solar lantern for just about everything now, it has really been a convenient thing for living in the village". 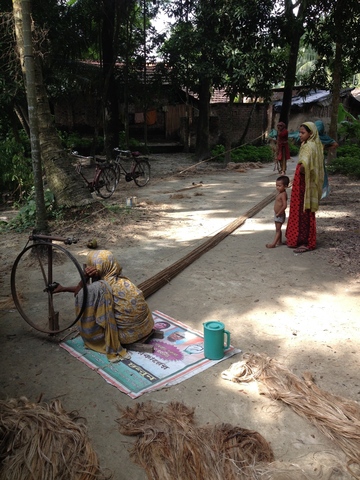