18-Year-Old Hariharan Riding Pillion Was Hit By A Car And Is Suffering Serious Injuries | Milaap
loans added to your basket
Total : 0
Pay Now

HK
You are sending a message to
Hariharan K
Go back

Shares
Shares
Share on whatsapp
After being rammed into by a 4-wheeler, 18-year-old Hariharan and his father were immediately admitted to the hospital. His father sustained a few injuries and a fracture to his leg but Hariharan not only broke his left leg into several pieces but now, he is unable to breathe and is alive through the assistance of a ventilator. He needs to stay in the hospital for additional treatments but his father, who is also unable to walk without support, has nothing left to save him.

Innocent victims of a road accident

On 7th March 2018, at 8 in the morning, Hariharan was on his way to get dropped off at college by his father, Kathiresan. Hariharan was riding pillion and when they were just half a kilometer away from home, they were hit, viciously, by a car going in the wrong direction.


Hariharan and his father, Kathiresan

The brutal impact flung Hariharan into unconsciousness. Both, father and son, sustained multiple injuries and the impact crushed and broke their legs too. Both were lying helpless for quite some time until someone noticed it and came to help.

In pain, Kathiresan managed to call and inform his wife immediately after the accident. They were rushed to the hospital and Kathiresan, who just had physical injuries, underwent a correctional surgery for his fracture and now, there are 3 metal plates attached to the bones in his leg. He is unable to walk without support and needs physiotherapy too. Understandably, he will not be able to go to work for a long time.


Hariharan, after gaining consciousness and before the onset of breathing problems

Hariharan is in bad shape

Hariharan, on the other hand, apart from sustaining physical injuries which need major correctional surgeries, also developed respiratory issues and his blood supply had taken a blow too. Hariharan cannot walk without the surgeries as his leg has broken in three different places.

The 18-year-old is unable to breathe too. He is assisted by the ventilator and he needs to stay in the ICU to stabilize, undergo multiple surgeries and get the additional life-saving treatment he deserves.


Hariharan and his mother at the hospital

Hariharan needs to remain in the hospital

Hariharan’s leg has broken into multiple pieces and he won’t be able to walk properly for a long time. He needs physiotherapy too. His father, who is also in need of the same, has exhausted all his resources and has nothing left to continue providing for Hariharan’s much-needed life-saving treatments.


Hariharan and his friends

Hariharan is so kind and hardworking

The 18-year-old is in his second year of pursuing a degree in Computer Engineering. He is a very kind and affectionate person. He loves animals, especially cats, his commitment to his family is irreproachable. Hariharan is very ambitious but now, an innocent victim of a road accident, he is battling for his life.

Kathiresan is in dire need of help to save Hariharan

Kathiresan works at the same hospital as a ventilator operator and earns a meager sum every month. He provides for his wife, Shenbaga, Hariharan and his younger daughter, Jyoti. Until now, for his own and for Hariharan’s treatments, he has spent over Rs. 6 lakhs. He has exhausted all he had and also asked people for help.

Not only has he sustained a major injury but he’s struggling to save his son’s life. It’s imperative that Hariharan remains in the hospital and the total cost of the life-saving treatments he needs is estimated to be around Rs. 5.5 lakhs. Kathiresan will be unable to go to work for at least a few months until he is able to walk normally again.

Kathiresan is in dire need of help to save his son and now, he is left with no option but crowdfunding.

After being brutally hit by a 4-wheeler, Hariharan is now assisted by a ventilator. His only hope of survival is to remain in the hospital for, at least, a few weeks and get the additional life-saving treatments he needs. His father, Kathiresan, has sustained a major injury as well and he has exhausted all he had on the treatments Hariharan needed until now. He needs your help to save his son.

Your support and contribution will save 18-year-old Hariharan’s life. 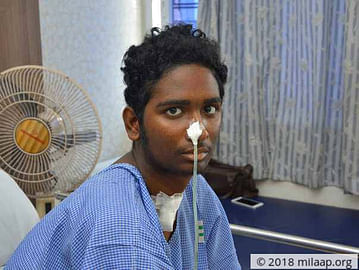 Help 18-Year-Old Hariharan Get The Treatments He Needs

Hariharan has sustained multiple injuries after being hit by a car. He needs your help.