This 16-year-old Will Succumb To Severe Malnutrition Without Immediate Medical Help | Milaap
loans added to your basket
Total : 0
Pay Now

Shares
Shares
Share on whatsapp
Shabaz is 16 years old. He loves watching sports on television. Yes, watching not playing, because Shabaz cannot even stand on his feet for long. For 8 years, his life has been far from normal. He even lost his childhood. People now count his bones when they meet him, and this body does not even have the energy to hide away. Shabaz is suffering from severe malnutrition and will succumb to the condition without immediate medical assistance.

8 years of malnutrition has cost Shabaz his childhood

Arefa Begum and Atta Ulla Khan recall that they had a healthy baby boy 16 years ago. All was well until he began having tummy troubles when he was just 8 years old. He was not eating right, and even if he was force-fed, he would immediately have to poop it out. His body was not digesting food.

"The doctor said he had acidity. The treatment did not work. We kept shuttling between the clinic and home for months. Shabaz was in his 8th standard when things got worse. We had to stop him from going to school because every day he would faint or vomit and we were called to bring him back home. He had a fever and was vomiting continuously for 10 days. We had to take him to a bigger hospital."

Ignorance may have put Shabaz's life in more danger

Shabaz was diagnosed with TB in his stomach. He was on medication for a long time. When he got better, his parents thought he was cured and stopped the dosage. Eventually, his condition got worse. The symptoms came back, and now Shabaz is in intolerable pain.

"He was eating. The vomiting and fever subsided. We took it as a sign. We are not that educated. I feared that the medicines will affect him if he was healthy and we continue to give him. Furthermore, we were struggling to buy the medicines. To us, it seemed unnecessary. Bukhar hai to dawai lenge, bukharchalagaya to dawaikyunlenge? (We take tablets only when we have a fever, don't we?)"

Shabaz may lose his life without medical intervention

Terrified of losing their child, the family brought Shabaz to Hyderabad. He is unable to even stand. His screams are barely whispers. He cries of throat pain and stomach ache. He says he cannot swallow water, and he is unable to eat anything.

"My husband works with a florist. If there is work, he gets Rs. 200/day otherwise he does not. We have spent all we have so far, Rs 77,000 and even that we had to struggle, beg and borrow. Here we have nobody. We have so much to pay for the treatment. They said we have to figure out what is wrong with my son, before that, start treating him for malnutrition, or else he will die."

These parents are in grieving over their son's pain. They are unable to fund Rs. 3 Lakhs for his treatment. Shabaz wishes for a day when he does not have to feel so naked in front of people, and he can be normal like his friends from school.

Your contribution can help relieve this 16-year-old's pain.

Click here to contribute to Shabaz or for more details on this campaign.
Donate 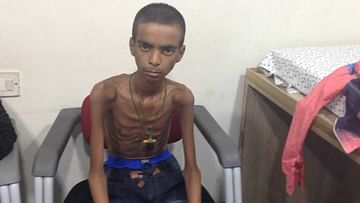 Shabaz has suffered from severe malnutrition for years and is in dire need of treatment to survive.

UPI: givetomlpshabaz1@yesbankltd (Copy to clipboard)
Or
Click here to read the instructions before you make a bank transfer.