This Farmer Is Single-handedly Trying To Save His 3-year-old Daughter From Cancer | Milaap
loans added to your basket
Total : 0
Pay Now

“She kept crying that her stomach hurts. We thought it was just a cry for attention like always. If I had taken her to the doctor earlier, she would not be in this situation, fighting cancer now.”

Santosh is a farmer from a village in Basavakalyan in Karnataka. It has been months since Santosh tended to the crops on his field. He has been in Bangalore living in a rented room close to a hospital, caring single-handedly for his 3-year-old daughter Sanvi, who is fighting a severe form of cancer. Sanvi feels isolated, away from her home and her mother. She is terrified of the needles and most of all, afraid that the monster within her is going to take her away from her family.

She had a fever which began to threaten her life

It began in March when Sanvi kept complaining of stomach ache. Santosh and his wife were expecting another child, so he wrote it off as a cry for attention. Then, Sanvi began to fall sick very often. Every few weeks she had a fever. At first, they thought it was the changing season, but when a nerve/blood vessel in her neck bean sticking out, Santosh began to panic.

“I went to a hospital in the village. It seemed like dengue, so they tested her blood levels. Everything was low, so she needed a transfusion. Every few days, they kept checking. Regardless of the units of blood, her levels seemed to be low. The doctor suggested we take her to Hyderabad.”

It took over 3 months to diagnose Sanvi with cancer

At the hospital in Hyderabad, Santosh nearly spent years of savings. After bills mounted to Rs. 1 lakh, a bone marrow test confirmed that Sanvi has blood cancer. By this time, Sanvi had been suffering for 3 months. Santosh was told that she needed chemotherapy, and if she had a relapse, she might even need a surgery that is expensive.

“I brought her to Bangalore and we went to NH. There was no time to wait. In 3 months, I saw so many symptoms, and she just kept getting worse. The doctor here says she needs chemotherapy for 2 years and after that some other treatment. I am illiterate. I do not understand. I do get what cancer means. I am holding on tight and just do not want to lose her.”

Sanvi’s mother is not with her

Santosh and his wife just had a baby. Nursing a 2-month-old, she is still in the village, while he is by Sanvi’s bedside. This battle has been tough on the family and Sanvi’s age as well as the distance has made it a nightmare.

“If we come anywhere near the hospital, she throws a tantrum. She is so scared, and she cries all the time, especially when they have to inject medicines during chemotherapy. I have 1-acre land. What we grow there is just enough to feed us all year. Whatever is left gives us Rs. 12000/year to get by. How can I save her on that?”

Santosh is already neck deep in loans as he needed Rs. 3 lakhs for hospital bills. The chemotherapy is estimated to cost Rs. 15 lakhs, and this father is now shattered imagining the worst for his baby girl. Santosh is at a loss for help to save Sanvi’s life.

Your contribution can give this baby girl a fighting chance to beat this disease. 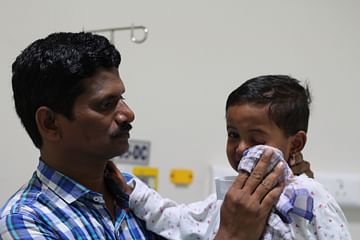 3-year-old Sanvi has a severe form of blood cancer and needs urgent our help to undergo...