Mother Starves Herself So Her 24-Year-Old Son Can Survive Brain Tumor | Milaap
loans added to your basket
Total : 0
Pay Now

DS
You are sending a message to
Dr. Siddhartha Ghosh
Go back

“Right from when he turned 16, my son has been living for us, taking care of us. He has not even started living for himself yet. He cannot die! Not like this!”

24-year-old Karthik has been more like a parent to his parents. Ever since his father met with an accident a few years ago, he dropped out of school to support the family. Now, he is struggling to fight a brain tumor. His parents want to do all they can to save his life, and give him a happy future.

His body was waging a war against him, and he did not even notice

Until 5 months ago, poverty was Karthik’s only problem. He did not even notice when his vision began to blur. Slowly, his ears began to trouble him. It was only when he faltered while walking that anxiety crept upon him. He wondered if he was sick, or whether stress was taking a toll on him.

“It started interfering with his work. Instead of going to the pharmacy (his workplace), he began sleeping in a lot. Whenever I asked him what was wrong, he would just ignore me. I thought he was depressed. I did not know he was sick.”

Even before his life could begin, this disease threatens to end it

15 days ago, Karthik’s mother, Basona, tried to wake him up. His face was so swollen that he was unrecognizable. Alarmed, they rushed him to a doctor in Agartala. After several tests including scans, Karthik was diagnosed with a brain tumor.

“We were referred to a doctor in Chennai. We gathered everything we had and came here. He had 2 surgeries already. He still needs one surgery to survive this condition.”

Basona and Shimon (father) are from a remote town in Tripura. Here, Shimon had a paan supari shop that gave him Rs. 6000/month until a traumatic accident crippled him. The family lost everything they had while trying to save his life. Karthik had just finished 12th class.

“My son dropped out of school so he could support us. He went to so many interviews but he could only get a job at a medical shop for Rs. 4000. We had our daughter married, and now it is just the 3 of us.”

When Karthik was first brought to Chennai, the doctors explained the urgency and rushed him into surgery. So far, after borrowing from friends, after selling whatever they had left, even their daughter’s jewelry, this family has spent Rs. 10 lakhs on medical expenses. They are left with nothing and need Rs. 6 lakhs for the next surgery.

“We had to bring Karthik back home for 2 months. In our current financial condition, we cannot even afford food for all 3 of us. I am not eating so we can save at least some money. I cannot sleep thinking about this nightmare. I just want my son to be safe and healthy. I hope a miracle happens, and he gets to have this surgery.”

Your contribution can save Karthik’s life, and even his family.

The specifics of this case have been verified by the medical team at the concerned hospital. For any clarification on the treatment or associated costs, contact the campaign organizer or the medical team.
Click here to save Karthik.
Donate 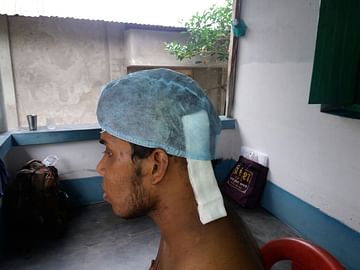 Help Karthik Get One Last Surgery For Brain Tumor

Karthik has been diagnosed with brain tumor. His parents plead for help to save him.