HCL Employee Who Met With A Traumatic Accident Is Now Struggling To Survive | Milaap
loans added to your basket
Total : 0
Pay Now

TM
You are sending a message to
Thellabati Manjusha
Go back

Shares
Shares
Share on whatsapp
28-year-old Jagadeesh met with a terrible accident last month leaving his wife in utter shock and despair. He has a severe lung infection and he is in ICU for over a month fighting for his life. Jagadeesh may have to stay in the hospital for a few more weeks until he recovers.

He left for Chennai to seek a job

Jagadeesh and Manjusha were happily married on 11th of August. It is quite natural for a couple to have countless dreams and plans for their future but reality did not let them have the privilege of staying together. Jagadeesh’s family is in a terrible financial turmoil as he lost his father very young. Manjusha's mother also passed, and the two families depended on him to meet ends. He had to leave his wife behind in Guntur, a village in Andhra Pradesh and move to Chennai to seek a job.

"We knew it would be tough staying away. What I didn't expect is to be in this situation where he might leave me forever."

Jagadeesh was working at HCL in Navalur, Chennai. He and his wife were hoping that they would soon overcome the financial crunch and breathe a sigh of relief. Unfortunately, life had even more cruel plans turning their life upside down. On Oct, 14th When Jagadeesh was on his way back to his room from the office he met with a terrible accident. He was pillion rider, a bike rider who was speeding lost his control and hit them in the back. Jagadeesh suffered most from this fall.

"I had a sinking feeling in my stomach even before I got that call. They did not say much, just that he met with an accident. I did not even know if he was alive."

Jagadeesh was admitted to the hospital at 3:40 in the morning and underwent a series of investigations and surgeries. He has a severe lung infection and has been on the ventilator since he was admitted. He barely knows what is happening to him. He is expected to be in ICU for two more weeks.

“He was not even conscious for the first few days. Under those bandages and wires. He was unrecognizable. We are thankful for the friends he has made. Those first few days were so crucial. My mother-in-law sold all that she had to come up with money for treatment, and they also contributed to pay Rs. 8 Lakhs worth bills.”  says Manjusha

He is the sole breadwinner

Jagadeesh is the sole breadwinner of his family and Manjusha’s family as well. He has a vibrant personality and always wore a smile on his face. He has compromised his needs and has always prioritized his family. His family cannot bear to see him now struggling to breathe and lying unconscious.

“No one has the strength to console each other in the family; we are just desperately hoping that he would come back to us. We want to keep him in the hospital until he recovers. The bills are shooting up, and we are not able to keep up."

Jagadeesh’s family have no source of income now and they have already spent Rs 28 lakhs so far and they would need more money to continue the treatment. They have exhausted all their resources and now they are absolutely helpless to raise funds. They are already exhausted physically and emotionally.

He is the glue that keeps them together. Your contribution will not only save Jagadeesh but also his whole family. 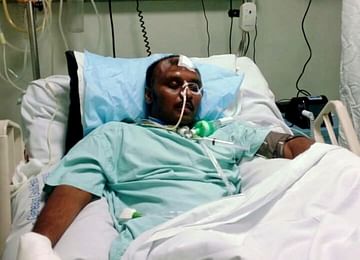 He is now in ICU requiring further stay for two weeks. His family cannot afford the treatment.