“Paapu (baby) is always crying now. He is very irritable and does not eat properly. His limbs were already hurting him, but 8 days back, he developed painful swelling on his chest and has been inconsolable ever since. I cannot control my own tears now; my innocent baby does not deserve to suffer so much. We think we will lose him before we get any help.”-Prema.

Ramesh, an auto driver, and his wife, Prema have been trying to find a way to save their second baby ever since he was diagnosed with a rare disease that affected their elder son, Likith (5). Likith looks more like a 1-year-old and cannot stand up without support. His mental and physical growth is stunted. They live with the guilt that they could not get Likith diagnosed on time; but they have hope that they can prevent Paapu from facing the same fate.  A bone marrow transplant can save him from this degenerative disease, but he needs it at the earliest before his condition worsens beyond repair. However, they are too poor to afford it and are running out of time.

Ramesh and Prema’s baby boy has a rare, dangerous disorder called Mucopolysaccharidosis as a result of which his body lacks the enzymes needed to break down a carbohydrate called Mucopolysaccharides, which is essential for building bones, skin, tendons and other tissue.The deposition of this sugar in the tissues damages and distorts the body, stunting physical growth and development, limits joint movement and even affects intellectual development.

“We are so poor and uneducated that we didn’t know how serious this disorder was until we saw what happened to Likith. People are surprised when we tell them that our elder son is 5-years-old. I don’t want the same to happen to Paapu. Learning from the doctors that this disease could even considerably shorten our child’s life has hit us hard. We don’t sleep at night thinking something bad would happen to him, and we won’t be able to save him.”-Ramesh.

Paapu used to be a cheerful baby despite his grave illness, but all his smiles have given way to tears now

Prema couldn’t believe it at first when the doctors said that Paapu is suffering from the same disease as Likith. He was always a cheerful baby, who looked like he was growing well until he developed excruciating pain in his limbs. Ever since then he has faced pain in some or the other part of his body. His mother can only watch helplessly when she sees her baby writhe in pain.


“He used to love playing with his brother and there was always a beautiful smile on his face. But all that has changed now. I only see pain on his face. Knowing that my embraces are not enough to ease his discomfort kills me. Even medicines can only help him to an extent now. Despite his own disability, my elder child gets upset seeing his brother like this. Our family has been cursed and there is nothing we can do to lift it.”-Prema, with tears in her eyes

Ramesh is barely able to fend for his family, let alone pay for his son’s treatment

Ramesh is an auto driver and earns irregular income. On some days he earns up to Rs 200, but on other days he goes home with empty pockets. Ever since Paapu’s health has worsened, he has not been able to go on trips at all. He is dependant on other people’s mercy to at least get two square meals for his family.

“From last week we are in the hospital where Paapu is being treated for his pain. The doctors are saying that he has very less time left to get a transplant. We don’t leave Paapu’s side now – if we leave him even for a minute, he wails. My wife holds his hand and prays for his recovery. She wants God to give all his pain to her. I just hope we find a way to save him before he slips away from us. We cannot bear to see him in such a terrible state.”-Ramesh

Baby of Prema needs a bone marrow transplant urgently to fight a rare disorder that is stunting his growth as well as causing immense pain in his limbs and chest. He can even lose his life if he does not get the transplant on time. His parents regret that they could not get their elder son (who has the same disease) diagnosed on time, thereby losing the opportunity to get him a transplant. This is the last chance they have to save at least one of their children before it is too late.

Your kind contribution can save this baby from a tragic end 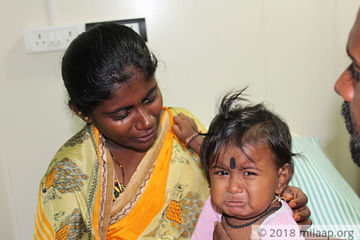 This 11-Month-Old Baby May Die Without Urgent Help