After Being Abused By Her Stepmother For 6 Years, Amina Is Fighting Liver Failure And Needs A Liver Transplant | Milaap
loans added to your basket
Total : 0
Pay Now

After Being Abused By Her Stepmother For 6 Years, Amina Is Fighting Liver Failure And Needs A Liver Transplant

“For 6 years, she was with her stepmother suffering so much abuse and neglect. When she contacted me, I never expected to hear those first words – ‘Ammi, take me to the hospital! Please! I am afraid I will die!’”

Amina is now 18 years old. She should be celebrating the joy of adulthood, exploring freedom of choices and discovering the world with her friends. Unfortunately, nothing about her life has been normal. For the past 6 years, Amina was separated from her mother. She was being abused by her stepmother even when her liver was failing. Neglected, her condition has become critical and she urgently needs a liver transplant to stay alive.
Amina with her mother in the hospital

Those 6 years were the reason for her illness

Amina’s parents separated when she was just 8 years old. The custody battle ensued after which Amina ended up with her father while her sister, Nejma ended up with her mother. Amina’s disease was probably taking shape at the time, but the symptoms appeared when the mental stress aggravated.

“I felt very lonely without Ammi. I do love my father, but he was always at work. Ammi was with me, she knew me. Knowing that I could not see her everyday killed me! I could not eat, I could not sleep. The pain just got worse.”

Amina is now in the hospital getting treatment. But without a liver transplant, her body will start failing

A stepmother who refused to take her to a doctor

Amina’s father got remarried. He hoped his new wife would take care of his daughter when he was abroad making a living for the family. Like a Cinderella story, the stepmother isolated Amina from the family.
Amina with her mother before her parents' divorce

“She was physically abused for those 6 years. That woman beat her up for every little thing, and my daughter felt helpless. Even when Amina’s symptoms got worse – when she had a high fever, when she was vomiting, when she was crying out in pain – that woman refused to take her to a doctor. If she had only taken her to a hospital, my daughter would not be so close to death today.”

Over the years, Amina became quieter and more unwell

Amina thought it was the end

The abuse changed Amina. She was happy, mischievous and enthusiastic. She is now quiet, resigned, and empty inside. She reached out to her mother and begged to be taken to the hospital.

“Her stomach was filled up with fluid. The doctor said her liver was damaged and there was nothing we could do. We were torn. We did not even have money for a proper second opinion consult. Amina’s classmates researched about her condition online and they connected with a friend who had liver transplant. They introduced us to Dr. Manish. They said she will live.”

Amina with her mother and her aunt. They are the only ones helping her get treatment.

They hope for your support

Amina’s will to live has gotten stronger after everything she has been through. She wants to prove to herself that life can be better, that she can do better. She is pleading with everyone to help her get this liver transplant that will not just save her but give her a fresh start.

“We have asked everyone we know for money. We have borrowed and somehow gathered some money to get her treated. I will be the donor. But till we get funds nothing will come of this.”

Amina's mother is a housewife and has no income. Her father does not pay child support. Amina does not have months. She needs an immediate liver transplant. She has already lost a lot of time.
Your contribution can get her treatment started. It will give her a new life.

The specifics of this case have been verified by the medical team at the concerned hospital. For any clarification on the treatment or associated costs, contact the campaign organiser or the medical team.
Click here to save Amina.
Donate 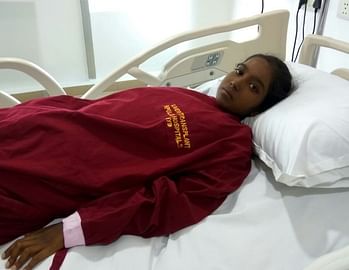 Help 18-year-old Amina get a liver transplant and live

Amina has suffered a lot in life - but she is ready to give up and seeks help to live.