Shares
Shares
Share on whatsapp
"He went to school for about 15 days as far as I remember. This pain has stolen his childhood. Ronald has been in the hospital more than anywhere else suffering for the most part in silence. It's just been him and me through this treacherous journey."

In 2013, Ronald (now 5 years old), was diagnosed with Rheumatoid arthritis after showing symptoms of severe joint inflammation and high temperature. He was treated for RA for two years, at the end of which, he was tested and diagnosed with Leukaemia. Although Ronald has been on chemotherapy for the past year, a bone marrow transplant is his best option to beat cancer and survive.

Rajitha, Ramesh, Ronald and a younger brother Tejas, come from Gulbarga, Karnataka. Ramesh is a constable, while Rajitha, a staff nurse gave up her job after marriage to take care of the family. In 2013, just when Ronald started schooling, he began to complain about severe pain in the joints and neck. Quickly, he showed signs of inflammation with cycles of high temperature and did not respond to any treatment. Rajitha, concerned about the swelling in the joints rushed him to the local doctor. Ronald had a fracture, but the doctor realized it was not an injury caused by a fall, instead it was a sign of Rheumatoid Arthritis.
Rajitha took Ronald to a pediatric specialty hospital in Hyderabad where the doctors confirmed his diagnosis for Rheumatoid Arthritis and began treatment. For two years, Ronald and Rajitha shuttled between home and the hospital for treatment at the end of which, his pain seemed to get better. In 2015, Ronald was tested for signs of malignancy, and Rajitha heard the worst news so far, that her son had Leukaemia.

Moving through hospitals in search of a cure

The mother and son immediately rushed to Kidwai, Bangalore to start chemotherapy. "He kept getting weaker with every cycle. His hair was falling off. His eyebrows were also disappearing. It was extremely painful to see him go through all that." The doctors advised Rajitha to opt for a bone marrow transplant for Ronald as it would be a permanent cure and save his frail little body from the gruesome effects of chemo. Due to the lack of facilities, Ronald was moved to NH in October where he is continuing treatment until his surgery.
"The doctors have said we can schedule his surgery within three weeks. I just want him to be alright. We have both been away from home for so long. In fact, I have lived in my parent's house with both my kids ever since he got sick so my mother can take care of Tejas. My younger son has been asking why I am not caring enough for him. Why I spend all the time with Ronald, if I even love him. He is just 3 years old. What can I do? I love both my sons. I want both of them to be alright. Ronald and I have been fighting this disease together. I hope we can beat it soon."

The cost of the treatment so far was covered by the government scheme, so Rajitha only had to struggle for other expenses including food, transport, and stay. Ramesh's savings, family and friends have helped the family immensely in the past three years. Now the family is not left with enough to afford the huge cost of surgery, which is Rs. 20 lakhs. With your support, Rajitha can end Ronald's suffering and give him a childhood he most deserves.

Contribute now to save Ronald

Click here to make a contribution or to know more details.
Donate 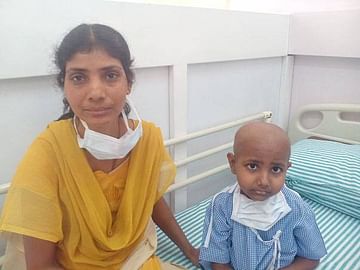 Ronald has been struggling to survive for three years. Your support can end his pain.

UPI: givetoronald@yesbankltd (Copy to clipboard)
Click here to read the instructions before you make a bank transfer.